Men’s soccer should have a bright 2014 after disappointing season 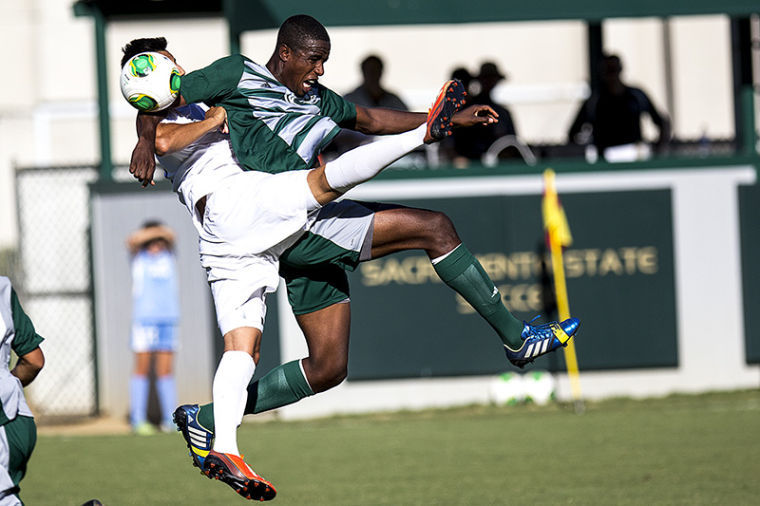 Sacramento State men’s soccer can only go up from here after finishing last in the Big West Conference with a 3-11-4, (1-8-1) record and missing out on the postseason for the second consecutive year.

Sac State is returning the majority of its roster next season after only losing four seniors. Those seniors include goalkeeper Cesar Castillo, defender Nate Barr, midfielder Almog Strikowski and forward Isaac Ikyurav. Castillo and Ikyurav received all-Big West honors for their play this season.

With Castillo leaving, it will leave a void at keeper for the Hornets. Castillo for his career, saved 243 shots, which is second most in school history. Next in line is redshirt freshman Teddy Sampson, who played in two games and tallied four saves on the year.

Sampson may not have much experience at the collegiate level, but he was an accomplished goalie in high school at Mira Costa High School. In his junior and senior years, Sampson racked up 39 saves while he led his high school to two CIF playoff appearances in 2010 and 2011.

A big reason the Hornets finished with only three total wins was the lack of a real scoring threat. Leading scorer, sophomore midfielder Edwin Luna, scored three of the team’s 11 goals. The Hornets were last in the Big West and 190th in Division I for goals scored.

Sac State’s three wins were all by a score of 1-0 against San Jose State, UNLV and UC Davis. On the other end, the Hornets were shutout in eight matches, going 0-6-2 in those contests.

If the Hornets hope to win the conference in 2014, the odds are against them. The only other team in the Big West going from worst to first was UC Irvine in 2008, in which it won the inaugural conference tournament. That same year, the Anteaters achieved eight more wins than in 2007 and advanced to the third round of the NCAA tournament.

Next season, Sac State should greatly improve with 15 players returning with another year of experience under their belt.

Sac State will also add five freshmen for the 2014 season.

Instead of having a win-now mindset, Sac State is going by the philosophy of build now, win later. It takes a deep upperclassmen team to win a championship, which is what Sac State did in the Mountain Pacific Sports Federation Conference in 2009 and 2010.

With the amount of playmakers and an improved scoring threat in Luna, the Hornets could make a complete turnaround on their way to a Big West title.