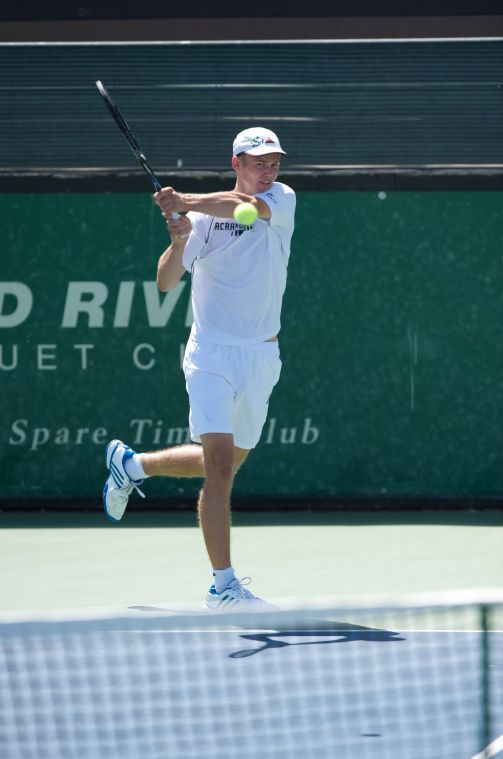 Marek Marksoo returns the ball with a backhand.

It did not take long for Sacramento State junior tennis player Marek Marksoo to develop an interest in the sport he has a strong passion for and it took even less time for Hornet coaches to realize he was a special player.

“You could tell the first day he got here,” said assistant coach Kevin Kurtz. “We could have recruited him just from the way he moved on the court.”

Marksoo not only possesses the necessary physical qualities to succeed, he has the mentality of a winner, especially in the eyes of head coach Slava Konikov.

“He’s always improving and always asking about his technique and his tactic,” Konikov said. “He’s a leader and a captain and he helps a lot.”

The journey to Sac State began for the 6-foot-1-inch junior in Tallinn, Estonia in the Baltic region of Northern Europe; where he started honing his skills at the age of six.

His sister, who is five years his senior, was first to play tennis and Marksoo quickly followed.

“One day, my parents and I went to my sister’s practice and the coach just started throwing me some balls to see how my coordination was,” Marksoo said. “My coach told my parents to bring me next time my sister came to practice and that’s when it started.”

From that moment, Marksoo never looked back; even at the age of 10 when he lived on his own in the capital city of Tallinn for six months. His parents had to stay in his hometown to work.

“I grew up in a really small town, so for me it was a big city and a new school and new people to practice with,” Marksoo recalled.

Marksoo understands the sacrifices his parents made in order to allow him to pursue his passion for the sport.

“Ever since I started, I took it seriously from the beginning,” Marksoo said. “My parents have always been really steady in the sense that they never pushed me, I did it on my own.”

His parents eventually rejoined him, commuting back and forth from their hometown to Tallinn all the while watching their son develop into a promising tennis player.

“I did pretty well for my age, so I always played against guys who were older and stronger than me,” Marksoo said. “I had to develop a game style to beat them.”

His knack for winning against bigger and stronger competition would eventually capture the attention of Kurtz.

By the time he was ready to start looking at colleges, Sac State was an easy decision for Marksoo.

“There were several schools I had interest from but coach Kurtz was the most upfront with me of all the coaches,” Marksoo said.

Kurtz played a big part in recruiting Marksoo and Bill Campbell, director of tennis, understands why he recruited the star player as heavily as he did.

“(Marksoo) just knows how to play, he’s experienced and doesn’t panic,” Campbell said. “He just knows what to do out there.”

While Marksoo comes across as a quiet person, Campbell pointed out that his leadership responsibility is evident on and off the court.

“He’s quiet, but he’s also pretty demanding of the other players that they don’t fool around,” Campbell said.

Marksoo’s dedication has produced more than a fair share of results on the court. In the 2013 season, he was named co-MVP of the Big Sky Conference and was the fourth player in school history to be nationally ranked.

Marksoo does not only take tennis to heart. His duties as an academic athlete are imperative to both himself and his coaches.

“If he wants to pursue professional tennis, he certainly has the potential if he stays healthy,” Campbell said. “He’s a very good student and has a really high GPA.”

But Marksoo said he does not want to get ahead of himself.

“It would be a dream to play professionally but I’m a realist,” he said. “Being a top 200 or 300 player doesn’t motivate me and being a top 100 or 50 player takes so much work; so just in case, I always have my education.”

Marksoo has overcome significant hurdles in life to get to where he’s at now, with a simple motivation to keep him going; to be a great tennis player.