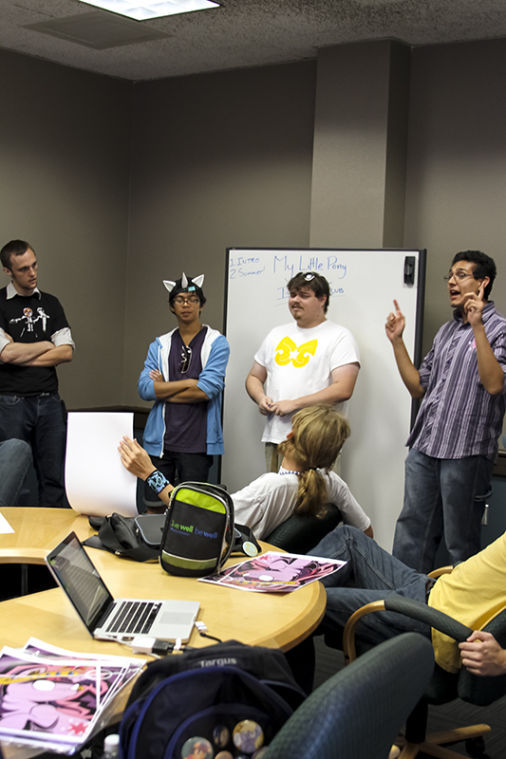 Traditionally when one thinks of “My Little Pony,” a natural association between cartoons and children is made, but one club on campus changing the way the classic children’s cartoon is celebrated.

Founded in fall 2012, the My Little Pony and Interests Club at Sacramento State meets weekly to discuss its shared admiration and love for the cartoon.

Though the show is geared towards a younger audience, the club members, that are called “Bronies,” have found the show to be very engaging.

Alfaro, who also serves as the club’s founding president, cites fluid animation as well as sharp comedy among his reasons for liking the show

“[It] makes a point to stand out from the crowd,” Alfaro said.

For Alfaro, the club serves as more than just a meeting ground for people to share their love for “My Little Pony.” It is a place where people with a plethora of interests are able to connect and form bonds with one another.

“We’re able to build strong friendships despite our backgrounds and histories,“ Alfaro said.

That’s a sentiment shared by Matt Montuya, a 24-year-old philosophy major as well as the club’s public relations and events manager.

He said “My Little Pony” comes as a breath of fresh air in a market saturated with cartoons shows that tend to follow the same formula.

While he gets the appeal of shows like “Transformers,” for him, “My Little Pony” offers a better sense of authenticity due to its take on tackling real world problems and showing characters with flaws.

For the members of the club, though, while the cartoon serves as common ground, there are other things discussed than just the TV show alone.

“We do more than talk about ponies all day,” said a 25-year-old English major Jason Clark.

Clark, who also serves as the club’s vice president, said that while a love for the T.V. is the initial factor that brought the members together, there is much more to the club than meets the eye.

25-year-old biology chemistry major James Henning is versed in various fan club culture, said those who belong to the “My Little Pony” fandom have shown themselves to be a more welcoming group.

“If you get into it, you see people are more willing to accept your insecurities,” Henning said.

While the club itself has a welcoming atmosphere, it is often times met with varied reactions.

Because of the club’s interests in the “My Little Pony” series, responses to the club have ranged from positive to immediate judgment.

For some of the members, it can be a frustrating experience at times. However, a strong community bond shared amongst the club, the members have discovered a stronger sense of pride in proclaiming their praise for the show.

“You should [always be] proud about you like,” Montuya said.

Alfaro said he has noticed many members becoming more sociable as many of those who belong to the fandom tend to be more reserved.

One thing the club does is make it a point to provide a comfortable, safe environment for its members.

“We emphasize to make [the club] an open environment,” Alfaro said.

As the club begins a new year, the members look forward to expanding their reach beyond the school as the club looks to start doing more fundraising events.

They have already taken the first steps to accomplishing their goal as they recently hosted the Sacramento Brony Expo on Sept. 14. The expo was the culmination of a year’s planning and Clark described the as the club’s “crowning achievement.”

The expo was more than just a gathering of people in the “My Little Pony” fandom. During the expo, the club was able to raise more than $5,000, which they plan to donate to charity.

Montuya said seeing the expressions of the kids at the expo made the entire year long process of planning the event worthwhile.

“Seeing these little kids light up was an amazing experience,” Montuya said.

While Clark admits the members of the club are a different breed of people, Montuya and Clark urge people to check out the club, along with the T.V. show, for themselves before making hasty judgments.

“If you gave it a try, I’m sure you would love it,” Montuya said.

Alfaro agreed with the statement and openly embraces anyone willing to give the show a chance.

“If you think ‘My Little Pony’ is geeky, thats fine,” Alfaro said, ”But if you really want to know about it, watch an episode, [and] if you like what you see, welcome to the club.”