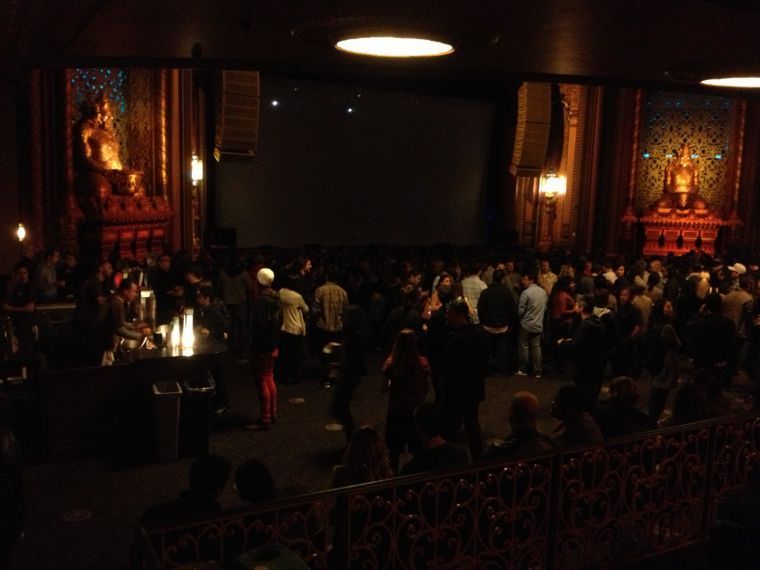 Fans of Sigur Ros wait for the band to come onstage.

The ambient rock band Sigur Ros, on a world tour from their home country of Iceland, played Tuesday at the Fox Theater in Oakland. I left Sacramento by bus in time to see the sun set over the bay.

As soon as I made it to the show, some guy with a foreign accent randomly handed me a VIP wristband. There was no awesome insider band member interview as I hoped and the VIP lounge was mostly expensive drinks and people dressed way nicer than me, so I went off to join the crowd of general admission commoners and their stinky weed.

The all-ages show drew in a crowd of late twenty-somethings who ambled as a mob to pack the floor. The theater lacked the usual pre-concert ruckus of obnoxiously loud conversations, but the air still buzzed with excited tones. The crowd only cheered for a moment as the band walked on the darkened stage and the theater fell quickly to silent anticipation.

The opening song was slow paced, with the musicians playing behind a giant mesh screen. They cast tall shadows on the divider, which hung at the front of the stage and had video images of splashing and growing patterns. In the middle of their second and faster song, at the tipping point where a gradual building pace finally smashed to a steady beat, the curtain fell and the crowd burst to cheers. The open stage, full of flashing lights and 11 musicians, was a vibrant shock after staring at the dim silhouettes through the mesh sheet.

The music of Sigur Ros is a symphonic sway of ambient and stirring songs, with many of them longer than eight minutes. Most of the lyrics are in either Icelandic or – as I recently learned and am still struggling with – some kind of gibberish intended to flow with the music. As the singer has mentioned in several interviews, the music is open to interpretation.

In the case of the gibberish, the singer is simply using his voice like a lead instrument without any syntax or structure. It was a little surprising after thinking for so long I was listening to some intriguing foreign language – I thought he was probably describing some crazy deep knowledge you would only learn living in a small snowy city of Iceland.  It turns out, though, he is up there just be-bopping and scatting all over the place. Either way, the music is absolutely beautiful, and since I do not speak Icelandic anyway, that is really the only reason I was interested in seeing them. The music has a way of gripping listeners in a meditative trance.

Bands like Radio Head and Explosions in the Sky are good musical comparisons, but the style of Sigur Ros often stands uniquely beyond description by any one or two genres. With a full stage of violinists, a small horn section, a bass player, percussionists and pianists, the extremely talented lead vocalist – capable of wide pitch ranges and perfect harmony – stood spot and center with his guitar and the trademark cello bow he uses to play it. The three female violinists also sang back-up in an intense choir-like way.

I imagine many fans of Sigur Ros like to put their music on when they are going to sleep or relaxing, but the live performance kept an attentive and rocking crowd. The audience was enthusiastic to applause and cheer as soon as each song ended and was quick to shut up so they were sure to hear all of the beginning of the next song.

I thought it was impressive the band members played songs from throughout their 19-year-career and still made the set flow together without any jolting transitions in style. From unreleased tracks to some from 2005, Sigur Ros played 15 songs over 90 minutes. It ended with the lead singer dropping his guitar on the ground and beelining it for side stage while holding his hands near his face in the blinding lights of the theater. I imagine it would be exhausting to sing without breaks – and so profoundly – after more than 40 shows already behind them. I am just glad they made the trek out west to share their incredible live performance with Oakland.