No more Christ in holidays 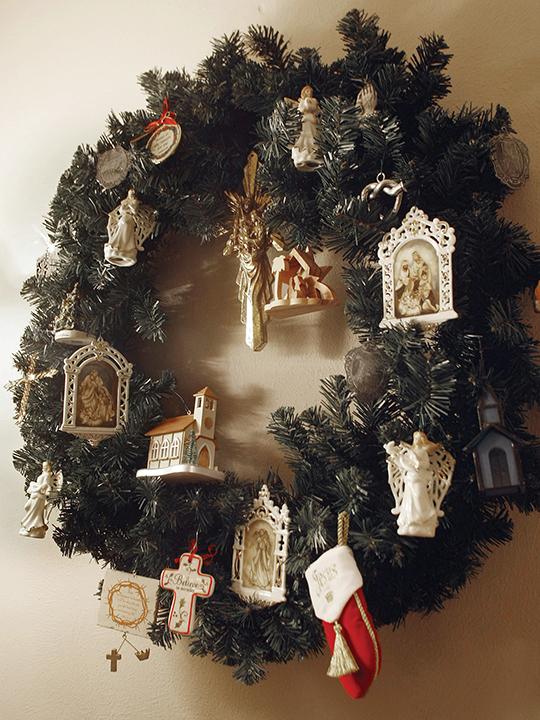 Barbara Barton decorated this Christmas wreath with a collection of Jesus themed ornaments.

It’s that time of year again: Starbucks has their special cups, two people were shot over a parking spot on Black Friday, obnoxious music is playing in every mall in America and the ‘Put Christ Back in Christmas’ bumper stickers are on display. It’s Christmas time!

Christmas is the time of year when greed and Christian self-righteousness start coming out of the woodwork. Even though I identify as Christian, I recognize that it is highly unlikely that Christmas will ever be a religious holiday again in America, due to the nation being so secular and the pervasive greed that invariably comes with the holiday.

That shooting mentioned earlier was not an exaggeration—according to the Tallahassee Democrat, two people were shot in a Tallahassee Wal-Mart parking lot over what police suspect to be a dispute over a parking spot. Both victims were non-fatally wounded and were sent to the local hospital, while the shooter remains at large.

Stories like this pop up after Black Friday usually because the people involved get so wrapped up in the general consumerism of the day that they start acting incredibly irrational. The fact that Black Friday is a special event in and of itself is an obvious sign of how much greed is associated with the Christmas season. Yes, it potentially brings in a lot of money for the businesses involved, but the only reason that happens is because those same businesses have convinced their customers they will save tons of money if they shop on Black Friday.

Even though the greed is wholly secular, Christian organizations haven’t stopped trying to reincorporate religious aspects back into the holiday. For example, CatholicCulture.org has compiled a list of thirteen actions offered to their users on how to “put Christ back into Christmas,” including installing bumper stickers with that same quote on one’s bumper.

Their motives are reasonable; the Vatican originally meant for Christmas to be a holiday centered on the birth of Jesus. They just want the modern interpretation of the holiday to reflect that. However, most first-world countries, including America, are too secular for such a major shift in their cultures, barring some huge event that would trigger it.

In fact, not only Christians celebrate Christmas. According to the Christian Science Monitor, Christmas in London is celebrated by Muslims, Sikhs and Hindus, among other religions. The holiday has become so secular that people who practice religions not even related to Christianity still celebrate it.

Christmas has stopped being a religious holiday and has turned into a cultural holiday, likely due to the theme of greed that seems to permeate the holiday. People like to get things, and Christmas is the one holiday that most people celebrate where gifts are bought for multiple people. People spend so much money on Christmas because cultural norms dictate that, for a person to participate in the gift-giving tradition, he or she must also buy gifts for the people that person is receiving gifts from.

That’s not to say everything about Christmas is about greed. A large part of the tradition surrounding the holiday is family gatherings with large quantities of good food and people you’re forced to hang out with purely because you’re related to them by blood or law. Bah, humbug.

Nick can be reached at: scheuer.csus.edu