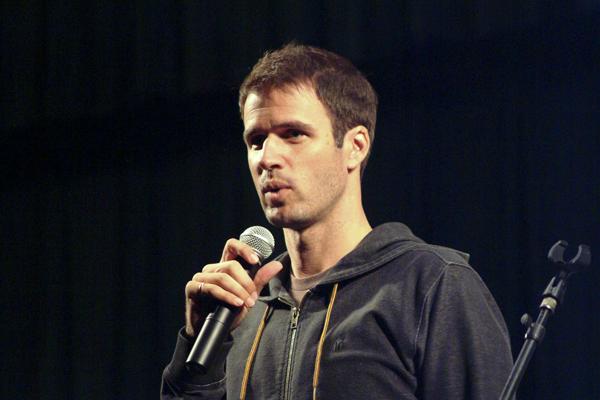 To Write Love on Her Arms founder Jamie Tworkowski tells the story of how he was inspired to create his organization Thursday night at the University Union.

Jamie Tworkowski, founder of To Write Love on Her Arms, shared his personal story Thursday evening at the University Union Ballroom.

To Write Love on Her Arms is described on its webpage as a nonprofit organization dedicated to presenting hope and finding help for people struggling with depression, addiction, self-injury and suicide.

The event started with a brief introduction by Tworkowski, but really opened when Tworkowski invited his friend and lead singer of The Honorary Title, Jarrod Gorbel, on stage to play some music.

Gorbel, brandishing a guitar, played what could be described as indie acoustic. The music was somber, yet upbeat; very fitting for setting the mood of that night.

Tworkowski gave a brief summary of his life where he started as a surf shop salesman and eventually became a top sales representative for Hurley. Most of what he talked about though was the events that made him decide to give that all up and start the nonprofit organization To Write Love on Her Arms.

Rather than just walking off stage after he finished telling his story, Tworkowski opened the floor to questions. Students asked for advice about how to help suicidal friends and thanked him for shedding light on depression’s debilitating effects.

“I liked the fact that it gave insight into a world that some people run away from,” Colton said. “It gives light to those that need help.”

Some students who attended had a more personal connection because they were going through similar situations Tworkowski discussed, such as social work student Jessica Beck.

“The event for me was very personal because of my own struggles with self-injury and depression, so for me it was huge for him to come here and speak,” Beck said. “Even though the room may not have been packed, it definitely filled some seats and hopefully educated some people on what it is, how to help and that it is real and it deserves to be heard and not shut out.”

Joseph Perez, a friend of Beck, was invited to come along and said it’s refreshing to see an event like this on campus.

“I’ve had my own struggles, issues that were brought up here,” said Perez. “It’s nice to see something organized and put together – I’ve never seen that.”

William Miles can be reached at [email protected]