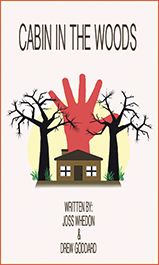 "Cabin in the Woods"

Drew Goddard, director, and Joss Whedon, producer, co-wrote “Cabin in the Woods” as a critique on slasher films and horror movies in general. Both men worked together on “Buffy the Vampire Slayer” and the pair brings the signature humor and clever writing to “Cabin in the Woods” in full force. The movie is clever, funny, violent and loaded with plot twists preventing me from revealing too much about the plot. Let’s just say that five friends go to a remote cabin for a vacation and things turn out far different and deadlier than they expected. Whedon and Goddard have worked their magic again; there’s a reason why this is my favorite film.

For the Halloween season, I have to start by recommending John Carpenter’s original “Halloween.” This film is widely known as a cult classic due to its pivotal role in spawning the modern-day slasher genre on such a low budget. In 1978, Carpenter used a basic, yet effective, storyline to create the white-faced boogeyman we are all familiar with today – Michael Myers. This guy is one determined serial killer and a tough one at that. He takes a coat hanger to the eye, gets shot six times and then walks away from a two-story fall. Him never dying makes the movie even scarier, not to mention the menacing music we hear every time Michael goes on the hunt. “Halloween” uses suspense and tension more than gore and cheap thrills to elevate itself above subsequent rip-offs. It’s one of the great grandfathers in horror movie history and well worth watching if you haven’t seen it already.

A really good horror movie to watch in October is “The Strangers.” It is about a couple who returns to an isolated vacation house after a wedding reception and a violent invasion of three strangers begins. After watching this movie, I wouldn’t want to go to a wedding in the middle of nowhere. I would stay in a populated area. This movie will get your heart racing after seeing the first “stranger.” It got me paranoid. I thought the stranger was behind me or was going to chase me. The movie just builds on the suspense. You will definitely cover your face with your bed sheets.

This John Carpenter sci-fi horror classic starring Kurt Russell puts a group of 12 unsuspecting Antarctic scientists against an extraterrestrial being, able to imitate any living organism and multiply through contact. The reason I love this film is because of the suspense. After a slow start, the movie quickly becomes a twisted game of cat and mouse as the scientists struggle to decipher the true form of this unknown assailant and escape with their lives. As the scientists are picked off one by one, paranoia runs rampant amongst survivors, testing the trust and loyalties of one another. Some scientists are willing to reason and talk matters through, while others are ready to off each other at the drop of a hat. It’s not your typical Halloween film, but it’s definitely worth a watch for fans of sci-fi horror looking for a vintage fright flick to watch this coming season. Just don’t mistake this one for the terrible 2011 remake.

My favorite movie to watch around Halloween is “Hocus Pocus.” This Disney comedy fantasy film was released in 1993 and has since then achieved cult status as a favorite to watch around the holiday for its nostalgic value.

A transplant from California to Salem, Mass., teen Max Dennison doesn’t get all the fuss about the Sanderson Sisters, three sisters who were hanged for witchcraft in 1693 and whose legend still fascinates the town. However, the legend comes startlingly to life for him when he accidentally resurrects the three witches on Halloween night. With the help of his little sister, his school crush and a special black cat, Max tries to put an end to the witches’ reign.

As the trio of witches, Bette Midler, Sarah Jessica Parker and Kathy Najimy are hilarious. No matter how many times I watch this movie each Halloween, it doesn’t lose its fun and charm.

My favorite movie to watch during Halloween time is “Shaun of the Dead.” It’s a great mix of horror and comedy that should delight any viewer.

The plot involves a zombie outbreak in London and focuses on the two inept main characters as they try to save friends and loved ones. Throughout their travels they meet old friends and plenty of hungry zombies ready to devour them.

A great moment is in the beginning Shaun, the main character, is doing his normal morning routine going to a convenience store right around the corner. The next day Shaun walks through the same process not even noticing the myriad of zombies around the store clerk dead on the ground.

Another great moment is Shaun trying to get rid of a zombie not realizing that she is actually a zombie. It isn’t until she falls on a pipe and is still moving does he realize something isn’t right.

The ending turns grim but there’s a great twist at the end making the movie a winner.