Wii U just an update 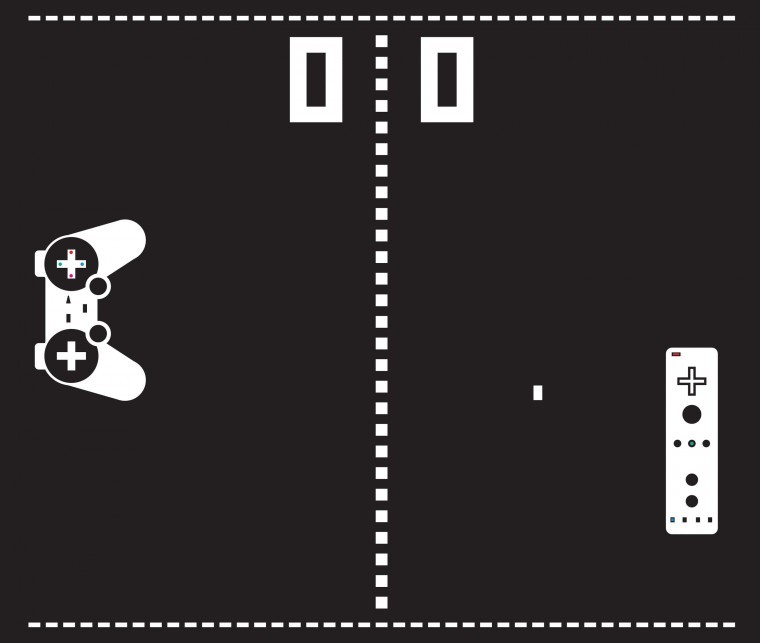 Sergio Pecanha color illustration of Sony Playstation vs Nintendo Wii, set up as paddles in a game of Pong.

With the always changing environment in the video game world, it’s no surprise to see a new console being released this holiday season.

However, the Wii U, which gaming giant Nintendo is releasing, is nothing more than a glorified Wii not worth the time and money of gamers and shows a growing trend of mediocrity in Nintendo.

On Nov. 18, Nintendo will release the Wii U, the first of the next gen consoles. Since Microsoft and Sony are both far off from even announcing a new console, Nintendo is taking a big step to start the new generation of gaming.

At least that’s what Nintendo wants buyers to think. The only real difference between the Wii U and its earlier console the Wii, is an iPad-like controller called the gamepad and HD graphics that are supposed to rival the PlayStation 3.

It’s fine if Nintendo wants to release a new console with updated amenities, but they should market it that way instead of saying it’s a brand new console. It’s a disservice to gamers because they think they are getting a brand-new console, when they are really only getting an update.

It’s like being told you’re getting a brand new car when it’s really just a “used” car. It’s not brand new, just newer than your old car.

What’s worse is it really seems like Nintendo is rushing this console out to cash in on holiday sales. The gamepad controller only comes included with the actual console. Nintendo announced it will not sell the controller separately in North America.

This will really make having friends over to play the Wii U more exciting. It will boil down to fights over using the controller and strained friendships over not getting to use it enough.

When the Wii was released, Nintendo was prepared. Hit games were released with it and the console sold out numerous times.

Nothing has been announced worth noting game-wise which is sad seeing as most new consoles come with an above average game to help support the launch. Usually a Nintendo console is bundled with a new innovative Mario game like “Super Mario Sunshine” for the Gamecube and “Super Mario Galaxy” for the Wii.

With the rush of this console, Nintendo should have taken a look at how Sony handles its consoles. Instead of relying on a new console to boost sales, Sony makes a commitment with its product. Sony calls it a 10-year plan and they stuck to it with the PlayStation 2.

The PlayStation 2 came out in 2000 and still to this day has new games made for it. After 12 years, it still has a large audience playing and enjoying the console.

The PlayStation 3 was released in 2006 but Sony knew it would take a while to catch some steam. Making games for both consoles, it slowly transitioned into making more games with the PS3 in mind first rather than the older PS2.

By 2010, the PS3 became the main console for Sony and it’s enjoying much success. With major hits under its belt like “Uncharted 3: Drake’s Deception” and a rich online service, the PS3 is well on its way to the 10-year plan.

If only Nintendo would wise up and do something like this. Nintendo used to be the major innovator in the gaming world and it has slowly slipped into mediocrity. Becoming complacent with name brand titles instead of pushing the envelope is a sad reality for older gamers who grew up with the vibrant history of Nintendo.

The worst part is that new and old gamers alike are going to be sorely disappointed with the haphazard release of the Wii U. It’s going to sell because it’s made by Nintendo and the name draws attention. It’s just hard to accept this as the reason for the Wii U to sell rather than it making a new mark on the gaming industry.

Hopefully, Nintendo will see the mistake and reward gamers later on with worthwhile content, but for now is only going to be a blemish on the already-diminishing stature of Nintendo.

Nathan can be reached at: nhm22@saclink.csus.edu