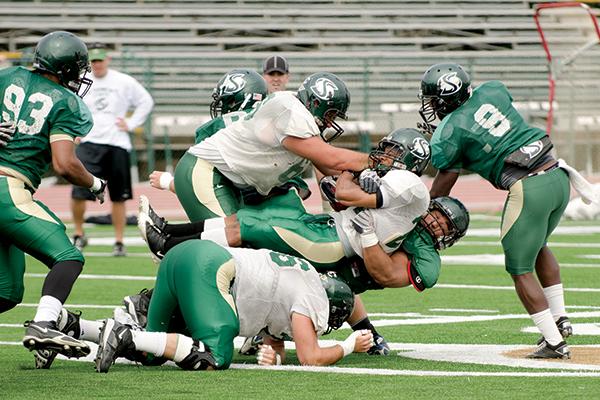 Sacramento State football is going to face some new competition during its conference schedule in 2012.

This past July, the Big Sky Conference welcomed in Southern Utah, UC Davis, Cal Poly, San Luis Obispo and University of North Dakota, making it the biggest conference on the West Coast with a total of 13 teams.

“They should give us some great rivalries,” Fullerton said. “Now, we are one of only three conferences in the west playing football.”

Senior linebacker Jeff Badger has seen the Hornets play the same teams for the past three seasons and said he is looking forward to the new schedule.

“It is nice to play four new teams you don’t get to play every year,” Badger said.

“It is nice to get some more California teams in the conference and to get the chance to get more teams in the playoffs,” Sperbeck said.

The expansion of the conference will also change the scenery of the schedule every year as different teams play each other each season.

The new revamped conference will also help bring publicity to its members.

“This is going to give teams like Sacramento State access to some great talent both in the classroom and on the field,” Fullerton said. “We couldn’t be sitting in a better position to sell the product that we are going to put on the field. It is really a good spot to beat in.”

Unlike universities with bigger football programs, Sac State is part of the Football Championship Subdivision where fewer scholarships are given out to football players. Instead of competing on levels with colleges that have greater opportunity to give out more scholarships, these programs, like Sac State, are placed in the FCS.

“It is (a challenge),” Fullerton said. “We put a lot of players in the pros but the one thing we don’t get is the player who is a ready made athlete. We get a lot of kids that have a lot of raw talent but we make them into great players.”

For the past seven years, the schools were previous members of the Great West Conference, but it lacked the required minimum amount of teams to get the automatic bid to the FCS playoffs that is awarded to the conference champion.

Great West Commissioner Ed Grom said the main reason the four teams came to the Big Sky was to have a shot at that automatic qualifying bid.

“[In years past] all of the teams would have had to get an at-large bid to reach the playoffs,” Grom said.

“We have moved on,” Grom said. “The Great West was born because of our football program, but we decided to go to an all-sport league back in 2008 and the other sports are still going on.”

Since 2004, all four teams that were members of the Great West have won conference titles.

“They all bring a lot of great qualities like coaching and a lot of great talent on the field,” Grom said. “You are going to see those four schools near the top of the league.”

The Big Sky looks to bring in the University of Idaho as a 14th member for the 2013 season.