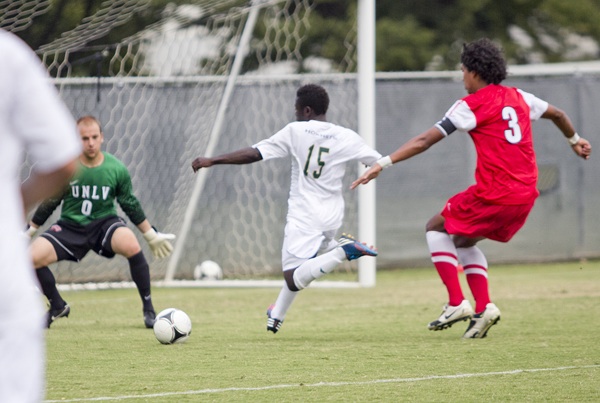 The Hornets (3-4-1) snapped a three game losing streak as they won their final non-conference game of the season. The Rebels (2-7-1) lost their second game in a row.

With 22 minutes into the first half, Hornet midfielder Alex Lopez sent a pass through to Isaac Ikyurav down the sideline. After defeating a Rebel defender one-on-one, Ikyurav delivered a strike on goal, putting Sac State on the board first. Ikyurav’s goal was also his first of the season.

Sac State’s lead was stalled as a Hornet foul set up a Rebel penalty kick in the 38th minute, tying the game 1-1. Another Rebel goal came in the 59th minute of the second half, giving UNLV its first lead of the game, 2-1.

Sac State retaliated with a goal from Gabe Silveira less than a minute after the Rebels took the lead. Silveira’s goal marked his third of the season.

There were no more goals for the remainder of regulation time, sending the 2-2 game into overtime.

Less than five minutes into overtime, Hornet Chris Sandoval sent a crossing ball into the Rebel’s box, which Max Alvarez and Rebel goalkeeper Joe Vitale met simultaneously. Alvarez was able to get a foot on the ball, which then found Ikyurav, who scored the game-winning goal.

Sac State pulled off the win with only eight shots on goal compared to UNLV’s 20.

The Hornets will face their first Big West Conference opponent Friday as they travel to take on UC Irvine.