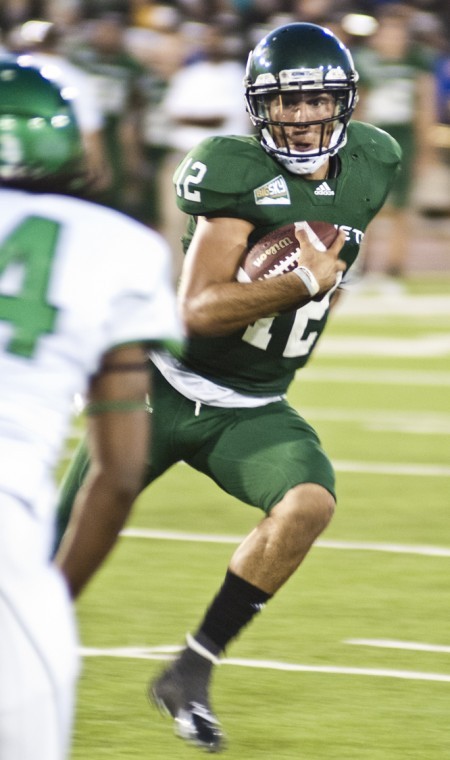 Turnovers stopped Sacramento State from any type of celebrating during its 2012 conference opener.

Hornets’ quarterback Garrett Safron threw two interceptions and fumbled inside the 20-yard line, leading Sac State to a loss against the University of North Dakota, 35-13.

North Dakota stepped away from its pass offense, which currently ranks second in the conference, and instead ran the ball.

“We knew they were a balanced team and they have a big, physical offensive line,” said Sac State head coach Marshall Sperbeck. “I think later in the game is where you saw that show up.”

In the second half, North Dakota outrushed the Hornets by 135 yards.

North Dakota scored in its first possession when quarterback Marcus Hendrickson threw his 13th touchdown pass of the season on a 32-yard throw to wide receiver Jameer Jackson.

Safron quickly recovered after he threw an interception on the Hornets’ first drive. On the next Hornet possession, he found DeAndre Carter on an 11-yard pass with 6:24 in the first quarter.

Safron’s struggles continued in the second quarter when he fumbled on the North Dakota 6-yard line on a missed snap.

“I felt good going into this game I just didn’t finish,” Safron said. “We just have to get back to work next week.”

Throughout the season, the Hornets’ running game has been split among junior Ezekiel Graham and seniors A.J. Ellis and Sam McCowan, who ran for a combined 264 yards.

Graham ignited the offense when he finished the first half with 116 yards on eight carries.

“The holes were there,” Graham said. “I just trust my linemen and follow through.”

Graham finished the game with a career-high 140 yards rushing, but as the Hornets deficit grew in the second half, he carried the ball seven times for 24 yards.

“I probably should have had Ezekiel in there more,” Sperbeck said.

With 8:18 remaining in the third quarter, Sperbeck decided to convert on fourth down on the Sac State 41 yard line, but failed. Six plays later, North Dakota scored on a 5-yard rushing touchdown.

“I really look back at trying to create some momentum on short yardage call,” Sperbeck said. “I really kick myself for that one.”

North Dakota shut the door when the team completed an 85-yard drive that took 9:27.

The Hornets will travel to Idaho State for their second Big Sky game next Saturday. Kickoff is at 12:30 p.m.

Second-string quarterback Mason Magleby saw his first action as a Hornet late in the fourth quarter.

The junior transfer from the University of Nevada completed six passes for 74 yards, which included a 10-yard touchdown pass to wide receiver Shane Harrison.