Football redshirts wait for their time to play 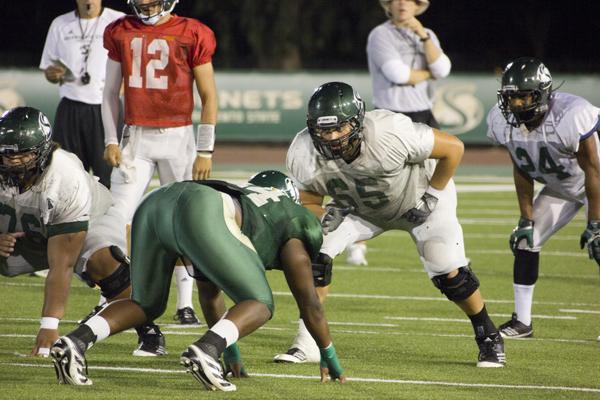 But when the time comes to board the plane for an away game, he will stay back in Sacramento.

That is the life of a redshirt freshman.

Last season, Roberts was named first team all-league as a senior at Los Alamitos High School. He caught 33 passes for 511 yards and 11 touchdowns.

That was high school football; this is college.

“I’ve really had to earn my stripes as a player,” Roberts said. “It is a rough process and it gets you down sometimes because you are not participating as much, but you have to look at it every day. I’ll get better and try to make it on that plane.”

College coaches have the option to redshirt a player for one season to extend his eligibility, but a redshirt’s day is not easier than any of the first-string players.

Roberts said he has to wake up at 6 a.m. three times a week to work out and then come back after class for practice.

“Since my sophomore year of high school I have been playing with the starting offense so it is different,” Roberts said. “At times you feel frustration, but I guess you just have to work through it and have a positive mind set.”

During practices, the job of a redshirt is to scout the opponent’s offense and defense to simulate what they might see in the team’s upcoming game.

“These guys are critical as far as giving us the look that we need for each opponent,” said secondary coach Steve Roberts.

Wide receivers Morris Norrise and Blake Robertson, who are now on the travel team, had to follow the same path when they were freshmen to get where they are today.

Despite not being able to travel, Robertson said he actually enjoyed the change of playing different offensive strategies each week.

However, some freshmen struggle with the idea of having to wait.

“When I came in, I thought I was just going to play, but when coaches told me I was going to red shirt I thought, ‘do I really want to play football and sit out to watch everybody else?’” Norrise said. “The mind set was I never want to do that again and I am going to fight my hardest to make the traveling squad and become a starter.”

Now Norrise is the team’s leading receiver with 14 catches and 192 yards in the first two games.

Even though he is just practicing this season, Kyle Roberts will eventually put on a uniform for game days.