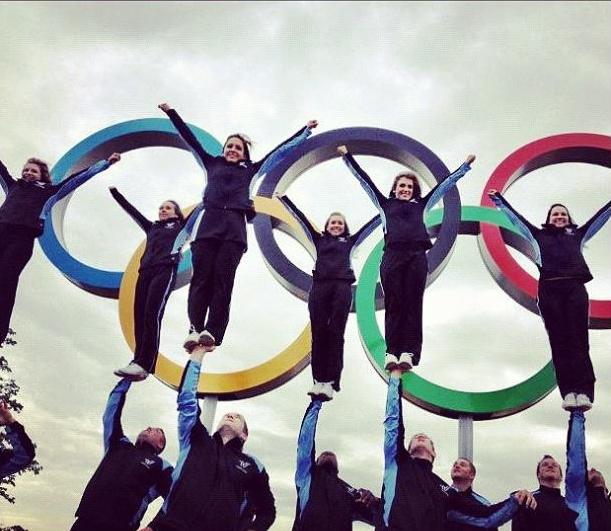 Varsity Cheerleading representing UCA stunting in front of the 2012 Olympic Rings in London.

Sacramento State cheerleaders James Blunk and Hillery Swanson were two of the lucky 16 invited by Varsity Cheerleading & Dance to perform at the 2012 Olympic games in London and represent the Universal Cheerleaders Association.

Blunk, 25, and Swanson, 22, have worked together and are ranked number 12 in the nation for partner stunting. They are instructors for UCA and travel the country teaching college cheerleaders how to prepare for game day performances.

“Blunk and Swanson are team leaders. They work very hard and have great relationships with their teammates,” said Sac State head cheerleading coach Bobby Biggs. “All of this opportunity is because of cheer. Who would have thought?”

Biggs called it a chance of a lifetime for Blunk and Swanson as they headed off to London for a week on Aug. 5 to perform halftime shows at Olympic handball and basketball games.

“I was contacted by Varsity asking if Blunk and Swanson could miss a team practice to attend,” Biggs said. “Being that they were asked to go to the Olympics, I said ‘yes.’ I was excited that they had this once-in-a-lifetime opportunity.”

It all started with a message to from Josh McCurdy, a Varsity employee based out of Tennessee. Blunk and Swanson were the only two west-coasters out of the 10 men and six women who were chosen from a list of 60 contending UCA cheerleaders.

“When I got the congratulations email I couldn’t have been more excited,” Swanson said. “It’s such an honor to represent the company UCA and Varsity. I love my job.”

Varsity was founded in 1974 and is a well-known international cheerleading company, but 2012 marks the first time it was invited to perform at an event as big as the Olympics. Varsity Vice President of Public Relations Sheila Noone said it was a tremendous opportunity for the company’s employees they could not pass up.

“We’re the leading trainers of cheerleaders and have the most camps of anyone worldwide,” Noone said. “We didn’t give them a lot of time to decide. They had about one day to tell us if they were going or not, but none of them hesitated.”

Both Blunk and Swanson have previously traveled overseas for cheerleading events to places such as Australia, China, Norway and Ecuador. Blunk will be heading to Germany in a few weeks, but said no other experience has measured up to his Olympic performances.

“I was very excited, but It never really hit me until I got there,” Blunk said. “The crowd of 12,000 was wild and energetic and the atmosphere was like nothing else I had ever performed in.”

The team performed mainly at handball games and performed at least three halftime shows each day. Swanson said she barely knew what handball was at first, but enjoyed the enthusiasm of the fans in the crowd.

“People started to call us ‘the cheerleaders,’” Swanson said. “Everyone knew who we were and were so excited to watch us stunt and tumble.”

The Varsity squad was initially set to perform at the men’s basketball game, but the performance was unexpectedly cancelled. Swanson said she was a little disappointed, but Blunk said watching the game from a closer view made up for it.

“We were scheduled to perform at halftime for the men’s gold medal basketball game, but when we arrived that had been cancelled,” Blunk said. “(At least) we got to watch the first half of that game in the tunnel live, which was really cool.”

After seven days of performances and Olympic experiences, it was time for Blunk and Swanson to make their way back to the U.S. Blunk said he was ready to get back to the states, but Swanson said she was sad it ended so soon.

“Everybody got along very well and it was really sad the day we left,” Swanson said. “We were all in it together, not knowing what to expect or how things were going to play out.”

Blunk and Swanson both said they would love the opportunity to go to another Olympics, but until then they will be performing at games and cheering on their Sac State Hornets.

Jillian Kweller can be reached at [email protected]