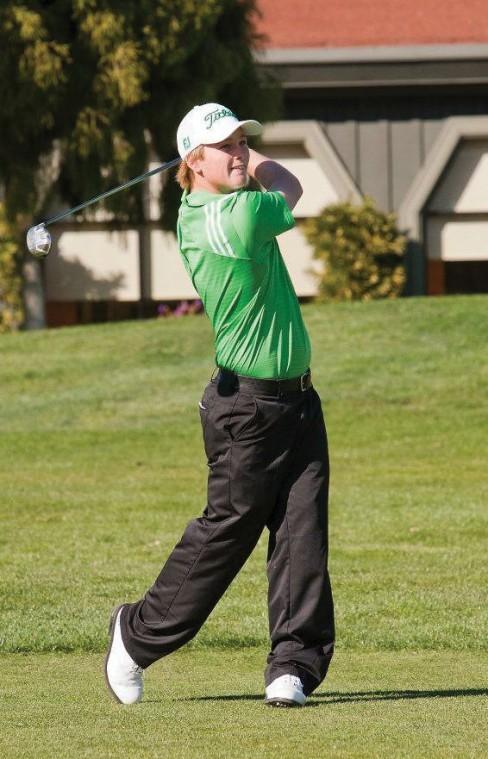 For Sacramento State freshmen golfers Owen Taylor and Eric Taylor, losing an 18-hole match of golf is not fun, especially if it’s against your twin brother.

Both would rather take losses from anyone else on their team instead of losing against each other, Owen Taylor said.

“We’re both very competitive,” Owen Taylor said. “Even more so toward each other. As we were growing up, we were always at the course all day – playing putting contests, chipping contests and finally playing for money or golf balls.”

Eric Taylor said it is like playing in a tournament every round when competing against his brother.

“It’s competition all the time,” Eric Taylor said. “We’re never out there just screwing around, because we don’t want to lose to each other.”

Owen Taylor said it is back and forth with wins and losses against each other, but credits the rivalry they share as helping them improve their game throughout the years.

“We’re always pushing each other because if he beats me, I am going to go grind and get better and then I’ll beat him and he is going to go do the same thing,” Owen Taylor said. “Being able to be OK under pressure because we have put ourselves in that situation so many times has helped us a lot.”

The twins’ passion for the game came when they were 4 years old, but golf was not the only sport they loved.

The twins started playing hockey at the age of 6 and would continue playing it for 12 years before deciding to sacrifice it to focus on golf.

“It is kind of a bummer we had to give it up,” Eric Taylor said. “We figured we aren’t growing much anymore, so we thought golf was our best chance of going professional in something.”

“As a parent, you kind live your dreams sometimes through your kids,” John Taylor said. “I did not have the talent necessary at the college level to last. I love the game and it was really hard for me to face that I had to do something different in my life.”

“But it is really satisfying I get to watch them compete and play well at a high level that I could not,” John Taylor said. “And for me knowing the game myself, I can kind of feel what they feel. I understand their disappointments and challenges they face out on the golf course.”

John Taylor said he wanted to make sure his two sons knew the importance of remaining calm and finding a way through the difficult times when they are having terrible rounds of golf. He saw in each of them at a young age how much they wanted to win, but stressed it takes time and a lot of mental focus.

“Golf can be a very lonely sport,” John Taylor said. “It’s not like you can get back in the huddle with your teammates or high-five everybody when you did something well, because it is usually only you and the other person you’re playing against.”

Another person the twins looked up to when they were younger was their older brother Bryan Taylor, who the twins were able to go watch play in his high school tournaments.

“It made me want to go even further with golf,” Owen Taylor said. “Seeing all the fun he was having made golf that much more fun for me.”

Eric Taylor said that family helped inspire them to play golf as well.

“We also had an uncle that played,” Eric Taylor said. “So that helped us stick with golf even more. And you can’t forget to mention we had each other. I always had someone I could go in the backyard and hit balls with for four hours straight as a younger kid.”

Heather Taylor said she is proud to see her kids further their passion for the game at the college level, but is also happy to see them growing up as young men on their own.

“Being at Sac State, it has been heaven for them,” Heather Taylor said. “They have been just eating it all up. They’re enjoying being apart of the team and the coach is great – such a really good guy.”

In their young careers at Sac State, the twins have shown what they have to offer in the future.

In Eric Taylor’s first Division I golf tournament in Tahoe, he had four birdies in the first five holes of play.

“I can only assume I was leading the golf tournament through five holes,” Eric Taylor said. “I ended up shooting a 75 for that round, kind of blowing it, but I put myself in a position where I was four under at a college tournament.”

“I remember flying up there and feeling nerves,” Owen Taylor said. “I am thinking ‘Oh boy, here goes the roller coaster ride,’ the whole time. I ended up shooting decent numbers for my first tournament. And hearing from my coach I performed better than what he anticipated made it a great experience.”

Fellow teammates Jake Johnson and Jordan Weir each believe the twins are on their way to becoming successful golfers.

“They have good core golf skills that will help them continue to get better,” Johnson said. “They aren’t ready to lead a team yet. Once the upperclassman leave next year, I think the twins will be ready to carry this team. They both have awesome talent that needs to be refined and once they do that, they will be ready to be leaders for this team.”

Weir said he is fortunate in having the twins on his team.

“They’re hard workers and hungry to succeed,” Weir said. “Both have very good chances to step in and play and contribute to our team in a big way.”

Jim Tinker, San Juan Hills High School boys and girls golf coach, said in light of hearing what has been already said by the twins’ parents and teammates, the only response he could give back is more praise.

“They came to me at the age of 14 years old motivated and highly skilled in the game of golf and no high school player in this area worked harder than these two boys,” Tinker said. “Their vision and sacrifice made these two boys exceptional golfers, but more important their character and leadership is the best that I have come across in 34 years of teaching and coaching.”

“Instead me making them better golfers, they made me a better coach and set a standard that all the players here at San Juan Hills H.S. strive for,”  Tinker said. “I don’t take any credit for the success that Owen and Eric had in high school. The credit, as usual, should go to their parents, John and Heather Taylor.”

“I have a goal in wanting to go professional after college. I have committed myself this year in becoming really good and trying to go for it,” Owen Taylor said. “It’s all about the little things adding up for us now.”

Gabriel Pacheco can be reached at [email protected]