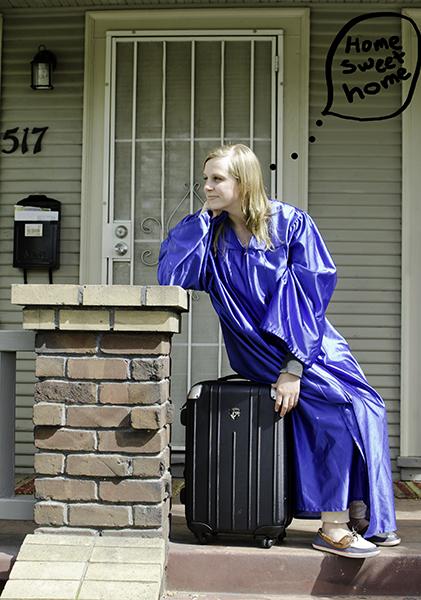 "As counterproductive as this seems, some students have valid reasons for returning to the nest post-grad."

Before ever getting to college, we all thought the same thing – I just want to get out of my parents house.

Don’t deny it. Living with mom and dad wasn’t exactly the riveting social life you dreamed about pre-college. But now you’re independent, living alone or with roommates and soaking up your wonderful newfound independence.

Fast-forward a few years and congratulations: It’s graduation day. No more school, homework, professors or tests, because now it’s time for a great big reality check as college boots you out into the job world.

For those still relishing in their independence, this reality check might come all too soon if graduation means moving back home. As counterproductive as this seems, some students have valid reasons for returning to the nest post-grad.

“My primary reason for moving back home after graduation was I didn’t have a job lined up that would pay my bills. The job I had in the latter part of college was a campus job only allowed for students. Since I was no longer a student I no longer had a job there. Basically I was broke, with no consistent source of income,” said Sacramento State alumnus Christian Clark.

Getting a college degree is a big accomplishment and meant endless possibilities and jobs being thrown at the feet of every grad. Today, however, it’s more a hiatus from mom and dad than a ticket out.

Today’s 20-somethings and grads are facing an unparalleled cultural shift in which they’re feeling uncertain about the future. What used to be the traditional markers of adulthood, from moving away, getting a degree and earning a living, are increasingly being delayed.

Moving home can offer a lot to a post college student such as free room, free food, free electricity … I’m hoping you see the free pattern here. Moving home saves money, but might cost something bigger.

Returning home after an unsuccessful job hunt is discouraging and makes people become more passive in their search for employment, especially if financially supported by their parents. Lack of motivation can delay a career and cause them to miss months or years of paychecks and job knowledge.

Although moving back can save students’ wallets for a while, it can become too comfortable. When “I’ll only be here for a year,” turns into a 30 year old still living in their old room with an enforced curfew, something went wrong.

Beyond the pathetic “oh woe is me, my social life won’t be the same,” the boomerang student is also missing out on precious job experience.

Yes, getting a real job is scary and seemingly impossible, but that’s what internships are for. Apprenticing and interning, while not always paid, are great opportunities to get job experience while looking for said job, and many internships become jobs.

The longer a student spends out of school and out of employment, the less likely they’ll get the job desired.

While working as a manager at McDonald’s might be a dream for some, the majority of college graduates are lining up for slightly more challenging jobs actually requiring a degree.

A bad economy isn’t an excuse for freeloading. Students fall under hard times financially and those with parents who still pitch in for rent and food are lucky, but should not take advantage. Parents want their kids to move out and experience life on their own. When students move back home after college, it’s a struggle for everyone.

“Moving back helped me for the most part financially. I was eating my parents’ food and not spending a ton of money, so I was able to get by on my inconsistent income doing odd manual labor jobs,” Clark said.

The biggest struggle may be adjusting from the unrestrictive nature of college life to their parents’ domestic expectations. When a living space is shared with mom and dad again, get-togethers with peers become limited in occurrence and range.

“I also was more motivated to job hunt because although living with my parents was pretty cool, it was also a drag not to have my own house to come back to with roommates to hang out with. I missed that aspect of living in my own place,” Clark said.

Bringing a date home for alone time is even more awkward. There is stigma adults living with their parents have the inability to survive independently of the comforts of home.

Don’t get me wrong; moving back home after graduation isn’t always a terrible thing. In many cases, it’s completely necessary to return to home base and may be more beneficial than imagined.

“Being at home saving money allowed me to continue my internship. After landing a job as an investigator with the district attorney’s office I was able to afford to move out,” Clark said. “It all stems back to if I hadn’t moved home, I couldn’t have afforded to improve my skill set and make myself more marketable to future employers through my internship. In a very basic sense … moving home got me a job.

Many people move back home after graduation and some frown upon that, like you’re losing your freedom. And in some ways, yes you are. But this isn’t a failure. If you have to move home, move home. Save money, focus on your future without the pressures of bills or, “Your peers wanting to get hammered on Thursday nights,” said Clark.

Moving home is only failing if you allow yourself to become lazy while there. Be ambitious and outgoing when job searching. Living back at home doesn’t mean you can start slacking off. That’s the time to really step up and get motivated.

Natalie Gray can be reached at [email protected]