Disconnecting from technology is a must for stress management 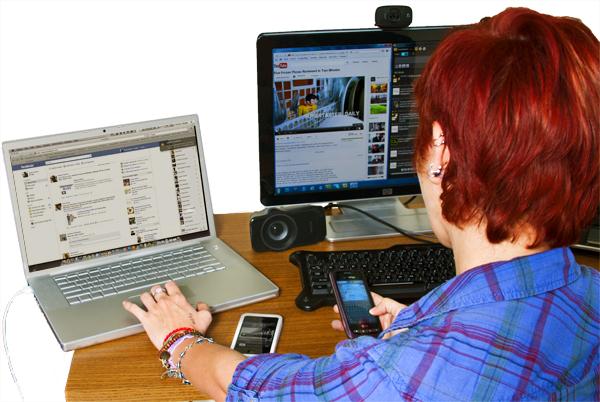 "More people are living their lives vicariously through their phone than actually getting out in the world and enjoying quality time, free of an electric device."

While people-watching in the University Union with a couple friends, one might notice people are paying more attention to their phones than to their friends standing next to them.The constant attention phones demand have people putting aside personal time for the convenience of others.

People are living their lives vicariously through technology rather than getting out in the world and enjoying quality time—free of an electronic device.

Think about how much you use your phone to text friends, call family, email teachers, update Facebook or Twitter or even read articles online. Face it, most are dependent on cell phones.

Junior liberal studies major Stephen Oropeza said he doesn’t feel the pressure to be constantly tied to his phone, although he admits to being on Facebook throughout the day.

“I think it’s important if you are on vacation or are with someone to not have it or not have it out. Like if you are out to dinner with a friend you haven’t seen in a while you should keep your phone away,” Oropeza said. “It makes me kind of sad. I’m the kind of person who likes to hang out with people, but most do that over the internet now.”

This addiction could lead to more negative side effects other than making us socially inept.

A study done by the National Sleep Foundation in 2011 has found using anything giving off artificial light, an hour before going to bed, leads to difficulty in falling asleep, staying asleep and getting an uninterrupted rapid eye movement cycle.

“Artificial light exposure between dusk and the time we go to bed at night suppresses release of the sleep-promoting hormone melatonin, enhances alertness and shifts circadian rhythms to a later hour–making it more difficult to fall asleep,” said Charles Czeisler, Ph. D., M.D., Harvard Medical School in a press release.

Cell phones were created to connect people with the ones they care about. But in a sense, people have lost a part of themselves to the phones.

When in middle school, students are taught to take quiet time without interruption—much like the benefits of meditating. People have traded constant tranquility for a plastic square that beeps.

I’m not saying society needs to drop all phones in the ocean, but people need to put phones down more often.

Yes, many people use them as alarm clocks, but they don’t really need to be right by the pillow when sleeping. If the alarm can’t be heard from across the room then turn up the volume. Or better yet, buy a cheap alarm clock. Quality sleep is worth it.

Don’t be afraid to turn the phone off for a while to get some real rest and relaxation. If someone needs to get a hold of another person that badly, chances are they know how to reach the person.

Instead of winding down and relaxing to a movie on television, an episode of a show on Netflix or even a type of video game—turn off anything needing to be charged and disconnect from the attachments of society.

There are plenty of ways to de-stress not involving something with batteries. Yoga, walking, working out, reading or just sitting and thinking—try anything interesting to you, but put the phone down.

Ashley Jung can be reached at [email protected]