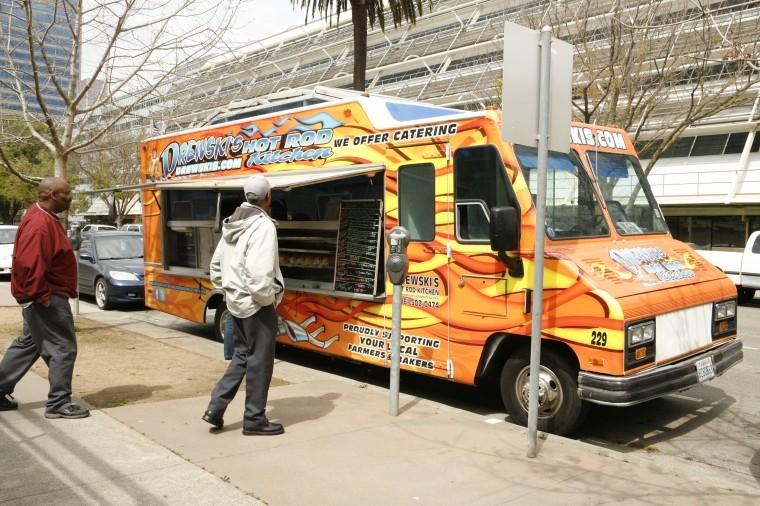 Food trucks are already a presence in downtown and midtown Sacramento.

After a long absence, food trucks could be coming back this fall to Sacramento State to give students an alternative to current restaurants on campus.

Jim Reinhart, director of University Enterprises Inc., said he hopes to bring food trucks in the fall on a trial basis to see if the concept is popular and financially feasible.

Reinhart said the plan would be to have a group of five or six trucks to come to campus on a rotating basis.

Reinhart said offering a food truck on campus could possibly hurt established restaurants on campus, but said the trucks would not be a daily fixture on campus.

“I don’t think there is enough business on campus to have a food truck here everyday,” Reinhart said. “I think it would make sense to have it here maybe once or twice a month as something special so that people don’t get tired of it. And it would be a nice option; people do get tired of the same old food options year round.”

Reinhart said the last time there was a food truck on campus was well before he got here two and a half years ago.

“I think maybe it was eight years ago,” Reinhart said. “There used to be wild feral chickens and a lot of people liked them, but it wasn’t sanitary. So they were rounded up and I don’t know what happened to them. Hopefully, maybe they were released somewhere appropriate. Anyways, shortly after that there was a food truck on campus that specialized in chicken. So that’s a running joke.”

Tani Spitts and Ron Carroll, co-owners of “The Leaven and Earth” sandwich food truck downtown, said they are open to the idea of coming to Sac State, but they are not sure how successful the venture would be.

“We know events can sometimes be disastrous,” Spitts said. “We prepare for them because people say there’s going to be 7,000 people there. And then you go there and you’ll be lucky to get 10 percent of that. But they can be disastrous or terrific. It’s really unpredictable.”

Reinhart said by placing a truck by Capistrano Hall it would ensure the truck would not be in direct competition with the University Union and the River Front Center because food trucks don’t have to pay rent and utilities. He said it would be unfair to those brick and mortar locations.

Reinhart said one of the main concerns of UEI is ensuring safety; making sure the food is safely prepared and kept at the right temperature. He said UEI is also looking to make sure the trucks are not too loud.

“Some of the trucks use generators, outside the truck that are quite loud and we don’t want to disturb classroom activity,” Reinhart said.

Reinhart said he is confident the visit of food trucks will happen for the campus in the fall.

“Whether it’s once a month or once a quarter, twice a month, that has to be determined,” Reinhart said. “It will be driven by the popularity.”

Spitts and Carroll said the biggest concern for them would be catering to students who do not have extra income for food.

“So if we came out there and we’re selling $7 or $8 sandwiches and you’re on a college budget, that might not work out for a lot of people,” Carroll said.

Carroll said they would not rule out coming to Sac State, but said it would be risky.

Senior accounting major Kelley Skerritt said she has gotten tired of the food selection on campus to the point when a couple of semesters ago, she wanted to try to do a fundraiser to get an “In-N-Out” truck to come to campus.

Skerritt said she thinks it would be cool to have a food truck on campus, but thinks if it only came once or twice a month it would not have much of big of an impact.

“I definitely get tired of what we have to the point where I don’t even really eat here anymore,” Skerritt said. “I’ll just eat when I get home.”