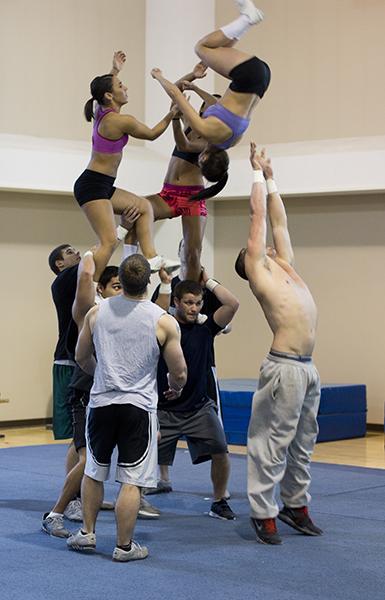 Men on the Sacramento State cheerleading team hold up the women after completing a stunt. The men are required to be in excellent shape to hoist up team members.

Male cheerleaders have been stereotypically categorized as being feminine, but the cheerleaders at Sacramento State are putting a stop to that stereotype and giving everyone a piece of their mind.

There are six men and five women on the Sac State coed cheerleading team. They travel to Florida every year for the national college cheerleading championships and cheer at every football, basketball and volleyball game.

Normally, one or two men will try out per year compared with the 60 women, cheerleading head coach Robert Biggs said.

Biggs said the lack of popularity of male cheerleaders in grade and high schools make them harder to come by.

“For so long, a cheerleader was recognized as a girl in a skirt. So when a male enters a female-dominated activity, you will have people saying comments just as any other thing that goes against social norms,” Biggs said.

Many people do not realize men were actually cheering before women had the chance to participate.

Johnny Campbell of the University of Minnesota started cheerleading in 1898 by organizing fan’s enthusiasm at a football game and it was not until the 1920s when women were allowed to organizationally cheer, according to the context of Title IX of the United States Sports Academy.

Cheerleading did not become a female-dominated activity until men went off to fight in the Civil War. Title IX states former presidents Franklin Roosevelt, Dwight D. Eisenhower, Ronald Reagan and George W. Bush all used to be cheerleaders.

“The media portrays cheerleading as being a female-dominated activity with girls in skirts, bows and pom-poms and being none of the standards of a masculine sport,” Kaufmann said. “Cheerleading is mainly stereotyped as being a girly, ditzy, cosmetic, popularity-seeking and easy activity.”

Along with the stereotypes Kauffmann mentioned, the biggest stereotype is that male cheerleaders are gay, Biggs said.

“I have haters saying we’re gay or boyfriends getting mad because I’m always around their girl,” said Sac State male cheerleader Sean Henderson. “If they only knew what we went through. But it’s OK; it pushes us and makes us work harder. Keep hating, cause we’re around pretty girls 24/7.”

Jumps and kicks are part of the female aspect of cheerleading, but Sac State male cheerleader Blair Bergmann said no one would ever catch any of the guys doing that kind of stuff. Bergmann said he wants people to realize they are just a bunch of normal guys that like to stay in shape.

“We’re always looking for more guys,” Bergmann said. “But it’s kind of awkward going up to another guy because they always think we’re hitting on them.”

Bergmann said it used to bother him when other people would say negative things, but as time passed, he realized he is bigger than half of the guys in the gym, so that makes him feel better.

“We’re in the gym like five days a week just lifting a lot of weight. We can all pretty much bench press 300 pounds,” Bergmann said.

Male cheerleaders have a lot in common with the stereotypical male athlete, such as playing football, basketball, soccer, or running track, Biggs said.

Bergmann used to wrestle before he got into cheerleading and said cheerleading requires athleticism, strength and is an activity based on power and precise movements.

“We lift weight like other teams and toss and lift the girls as well, which plays a role like weights. We put our bodies through awkward positions with tumbling and flipping and tossing a human being while they flip and land on one hand six feet plus in the air,” Henderson said. “They don’t understand that we do have a persons life in our hands and one false movement can cause serious injury.”

The men and women play the same role on the team, but there are advantages of being a man, such as providing extra strength and louder voices, Biggs said.

“Men give another element to the athleticism that is needed to perform high level skills, along with getting the girls in the air for long periods of time,” Biggs said. “It is also easier for the guys to catch the girls while they are in the learning process for added safety in stunt building and tumbling.”

When it comes performing stunts and lifting cheerleaders in the air, both men and women are capable, but three females are assigned to be the base compared to one male.

“Girls can do the same, but males add that extra strength and more of a wow effect,” Henderson said. “People like to watch one man rather than a group.”

The future of cheerleading could have more male participants as men are dispelling the myth that cheerleading is just for women.

“People are starting to see cheerleading as more than cute girls cheering on the sideline,” Bergmann said. “The guys are competitive and all want to be the best.”

Jillian Kweller can be reached at [email protected]