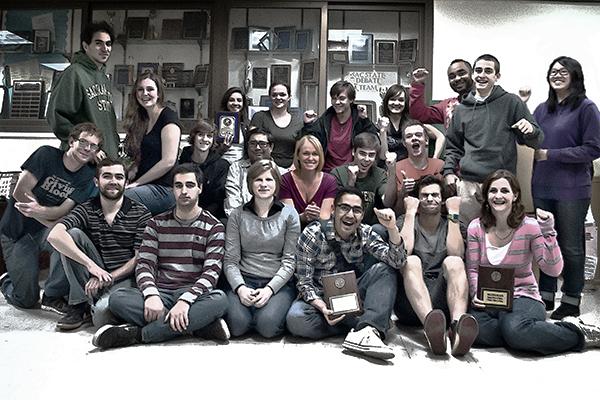 Members of Sac State's debate team pose in front of their awards - with Kristen Tudor, team coach, in the center

Sacramento State’s debate team heads toward this weekend’s competition at CSU Northridge with its confidence at an all-time high after a series of recent victories.

The team has already taken the top spots at several tournaments this semester, earning first place at the San Francisco State University Tournament in the novice division with the team of Becca McDonnell and Conner Murphy and first place in the Santa Rosa Junior College Tournament with the same team.

Over a typical tournament, two people from the team will partner up, leading to six teams representing Sac State over a three-day period.

“We’ve been in finals in every debate,” said Kristen Tudor, the team’s coach of nine years said. “This is the most awards we’ve ever won in one semester.”

Murphy, a junior communications major who joined the team last spring, said his family is ecstatic for his success. He said he was inspired to join the team initially by his grandmother, Barbara Murphy, who encouraged him since high school to join.

His enjoyable experience on the team encouraged him to continue studying at Sac State and the win at SFSU was a thrilling moment for him.

“Not to be cliché but the last day felt almost dream-like,” Murphy said. “Going into the tournament I had not even imagined making the elimination rounds, let alone winning the tournament.”

Tudor said this is the largest team she’s had in her nine years of coaching.

“They are a fairly inexperienced team,” Tudor said. “But they have lots of talent and lots of commitment. It really takes both to succeed.”

The debate team is not just a club, but a twice-per-week, three-hour class, in addition to practice and tournaments.

“It’s an incredible commitment,” Tudor said. “But they get a lot out of it. They really do. The skills they learn here will help them no matter what career path they choose.”

At the Oct. 21-23 Diablo Valley College tournament, the team of Amanda Millen and Mario Gonzalez won second in the novice division

This season marks senior organizational communications major Amanda Millen’s first year with the debate team. She said she was nervous at first, but the veterans on the team have taken the newest member of the debate team under their wing.

Millen joined the team after enjoying the mini-debates in Tudor’s argumentation class. She thought it sounded like a fun team to join, and might help out her resume.

“My family loves to tease me about how my argumentativeness makes me a natural for the debate team,” Millen said. “They’re full of jokes about how the debate team is a bunch of nerds. But they’re proud and happy that I’m able to take a break from homework and do something I enjoy.”

Millen is looking forward to their biggest tournament yet, since she thinks the team has only improved in recent weeks.

“I think I and the rest of the team have grown a lot in the past two tournaments,” Millen said. “We’re going to give ‘em hell and have a great time doing it.”

Millen said there is rarely a moment during their road trips she is not laughing.

“We’ve developed several of our own little inside jokes, from ‘Zoosk’ to breath mints,” Millen said. “Team J-Lo will occasionally sing or discuss chess tactics, much to the dismay of the rest of the team.”

Millen said she gets nervous every time she is in a debate, but once the round starts that feeling disappears.

“Something I’ve had in common with the people I’ve been partnered with is that we like to have fun during a debate,” Millen said. “So we just relax and joke around and have a good time.”

Since Millen is one of the first semester novices, she did not attend the San Francisco tournament, but did attend the Diablo Valley tournament.

“It was a little intimidating because it was a much larger tournament than my first tournament in Santa Rosa,” Millen said. “But the team did really well and I had a blast. We encountered some really good teams from other schools, and I think we made an impression and those other teams are going to look out for us now.”

Millen said right before a debate round both Tudor and Crane will help them develop a strategy based on the other team’s known strategies and on the judge’s known preferences.

“Both of them are brilliant and play a major role in the team’s victories,” Millen said.

Chantel Crane is now in her second year as the assistant coach of the team, after being team captain for three years. She primarily helps the team conduct research before debates.

“We find out what the other teams will be arguing, then we look up the articles they are using as evidence for their claims, and then we see if there are any holes in their story,” Crane said. “I help our team compile the other team’s strategies. I judge at tournaments as well. This helps me to see how the other teams articulate themselves and what their possible weaknesses may be.”

Crane has seen quick progress in the newest members of the team. In her novice teams, she has seen them go from being uncomfortable in practice rounds at school to strategizing and getting excited about debating.

“Conner Murphy and Rebecca McDonnell have gotten so much better this year, getting extremely comfortable with their skills, branching out to make complex arguments and getting faster,” Crane said. “Speed is the key.”

Murphy said in order to prepare for a debate he stays up-to-date with the news, in addition to the weekly practice debates.

“I make sure to read up on world news every day, as well as rewriting what we call ‘frontlines’ so that I can better understand them,” Murphy said.

Crane said their success is not unusual since they are very good at teaching people how to debate and they are rewarded for the high level of preparation they require.

“The students on our team truly are the cream of the crop,” Crane said. “This semester has been successful, but next semester is going to be where we will really shine.”

Tudor said CSU Northridge will be their most competitive match yet. It features more schools than any other tournament so far, with schools such as Arizona State University and Stanford competing.

“They are all really dedicated and team players,” Tudor said. “They are not just in it for themselves.”

Bethany Renfree, a junior government major and a mother of five said she could not commit to the team without the support of her family.

“The kids would prefer not to have me away from home,” Renfree said. “Sometimes they start to complain about it, but they see how much it means to me to be a part of the debate community and engaged in this activity, so they do cut me some slack. It feels good when my kids tell me they are proud of me for being in debate because I know they see how far I have come and they respect me for that.”

As for CSU Northridge, Crane is confident they will win in novice and she said she anticipates top speaker awards and wins in junior varsity.

“We have always had a lot of success at this tournament, and this year with our dedicated team members and the numerous practice rounds we have had I’m sure we will surpass our previous successes,” Crane said.

Millen said she is not looking forward to the drive to CSU Northridge, but is excited for the tournament itself.

“That’s a long time to have to sit in those less-than-luxurious vans,” Millen said.

Crane said professors throughout the campus would be shocked to see how much work and commitment you can get from students.

“We aren’t a glamorous sport that people like to watch, but it really is something special,” Crane said.

John Thiel, a junior business major, said his history with the team is one of commitment. He joined the debate as soon as he started at Sac State and said Debate is part of his essence at this institution of learning.

“When I first joined all the concepts and what was expected of me as a debater blew my mind,” Thiel said. “It took a lot of time and effort for me to learn how to effectively do policy debate. Since this is my third year on the team I have seen many people come and go.”

Crane said she thinks she is probably the luckiest graduate assistant on campus because she gets to learn about her students, teach them in a friendly environment where she said the progress is evident.

“John Thiel has been succeeding on the debate team for going on three years,” Crane said. “Bethany Renfree is a mother of five who dedicates countless hours to being successful on this team.”

Tudor said in order for them to succeed the team has to do an immense amount of research and practice.

Tudor said since the team spends a lot of time in a van traveling to their tournaments they end up really bonding, despite all the work they have to do to prepare.

“They keep their senses of humor and have a good time,” Tudor said.

Millen said the students are what make the debate team such a fun group to be a part of.

“The great thing about this bunch is that their primary concern is not winning, but rather having fun and improving their debate skills,” Millen said. “Winning is icing on the cake.”