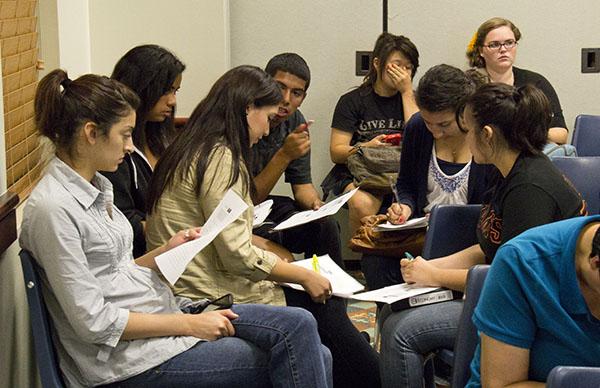 Group of audience members working on a case study during the human trafficking presentation by Open Doors Inc. The meeting took place Thursday in the Walnut Room of the University Union.

A representative from Sacramento’s Opening Doors came to Sacramento State Thursday, where she spoke about the human trafficking epidemic in the Sacramento region.

Human trafficking is an issue that continues to grow. It is defined as a pattern of power and control used to extract labor or services for financial or material gain.

It is said that 50 percent of all human trafficking is sex exploitation, such as prostitution. While the other half is labor.

To a crowd of around 45 students, the speaker, Tanya Shannon shared the horrors of human trafficking.

Shannon started in January 2008 as an intern at Opening Doors before the group got funding to have a separate human trafficking department at Opening Doors. She became that program’s director.

“Due to the current economy, human trafficking is growing exponentially,” Shannon said. “There is a lot of work that needs to be done.”

Sacramento has been ranked third of cities in the nation in the amount of trafficked. Between 14,500 and 17,500 are victimized every year.

With the economic crisis, places like massage parlors that use trafficked prostitutes go unchecked by the police who do not have the resources to do regular stings.

“Resources are dwindling, so we now heavily rely on volunteers for our organizations,” Shannon said.

California is the top destination in the country because of the number of harbors and airports in the state.

Tutie Snowden, junior sociology major, hopes to help fight the issue of human trafficking through the degree she is working on.

“My eyes were open after seeing this documentary about very young girls being exploited,” Snowden said. “I got very emotional and decided to change my major from psychology to sociology.”

Sacramento has ranked as high as second on the list of cities with the highest amount of child prostitution.

It was not until 2005 when Senate Bill 1569 was enacted, which made human trafficking a felony in California.

“It really made me sad because I didn’t realize Sacramento was a hub for trafficking and how many people were exploited,” Snowden said. “I just want to help these victims.”

Anise Shah, graduate international affairs student, has long been aware of the issue of human trafficking.

“Being an international student, I had focused so much on that aspect, I hadn’t realized what a huge problem it was here,” Shah said.

Senior journalism major Madina Noristani is the president of Peace and Conflict International. The group is making human trafficking their issue to bring attention to the campus this semester.

“I was just really happy just to see how many people came out, and really care about what we stand for,” Noristani said. “I hope we can encourage others to change.”

Sacramento is appealing to traffickers because of the large, most-often exploited immigrant population. The city’s convenient location on the Interstate 5 corridor between I-80 and Highway 50 is also a factor in its popularity among traffickers.

“It’s happening in our own backyards,” Noristani said. “We want people to keep their eyes open to this issue.”