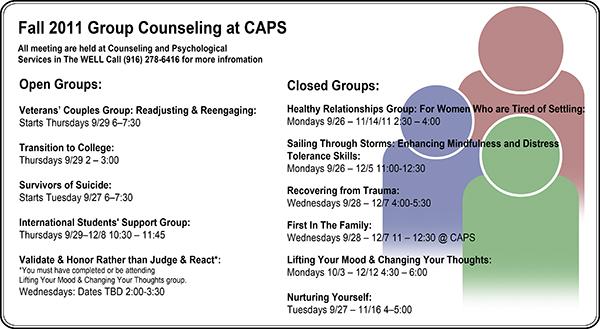 Counseling and Psychological Services at the Well launched a new group therapy series to help students overcome stress and the daily challenges of college life.

Four unique sessions are running, with one more slated and others in development, said CAPS Clinical Director Karen Durst.

Individual, couples and relationship counseling for Sacramento State students, faculty and staff is provided by CAPS. Group counseling options have been steadily increasing to match student interest since 2010, Durst said.

Previously, there were limited sessions with low attendance, she said.

Durst joined CAPS in August 2010 and said counseling has been near the bottom of student satisfaction surveys for many years at Sac State.

“It’s not surprising that our numbers were low. There was a lot of transition in the year I came,” Durst said. “CAPS had just moved into the Well and merged with Student Health – we had 100 percent turnover of counseling staff.”

Durst said her primary responsibility then was to provide basic services, hire new staff and put them in place. Now, one of her goals is to increase rankings and give students what they want.

“I am satisfied with getting staff that care and are dedicated to the students,” Durst said. “I want to build a strong foundation by merging and hiring staff with experience, expertise and dedication.”

In the United States, people do not speak as freely about mental health as say, diabetes or another physical ailment, so they may feel more isolated, Durst said.

Specific skill sets are developed and taught around problems like depression or anxiety, and then the participants practice them with each other, she said

“Students share meaningful responses beyond ‘Hi, hello, how are you,’ Durst said, “which have a different impact than working with a professional therapist.”

“Recovering From Trauma” is still accepting new members while the other groups launched within the last two weeks filled and closed quickly, said Kayleigh Lembke, one of the group’s leaders.

Lembke is an intern at CAPS pursuing a master’s degree in social work at Sac State and co-leads the group “Lifting Your Mood and Changing Your Thoughts.”

“We explore causes of negative thoughts and what stresses students out – work, school and time management – typical concerns,” Lembke said.

Closed group sizes range from eight to 14 people with adjustments based upon group need and facilitator comfort level, Lembke said. Open groups range in size from three to 12 clients.

“The groups are really led by the participants, but flexible to meet their needs to the best of their abilities,” Lembke said.

Loretta Abbott, a social worker who graduated from Sac State in 2008 with a master’s degree, focused on mental health and school counseling credentials.

“I think group therapy is important for everyone, but especially in college because people’s stress levels can get pretty high,” Abbott said. “Having a place to go to identify with other people and see them go through the same difficulty is tremendously helpful.”

“Something that comes up that’s universal with all students is test anxiety,” Abbott said. “I want to do a group about being mindful of where a person experiences that anxiety and how to overcome it.”

In a test anxiety group, she said solutions might be to observe studying and eating patterns along with mental preparedness techniques.

“College is a unique phase of life. There are so many concerns that people come to seek support with,” Lembke said. “It gives me a huge pool of situations to learn from.

I love the feeling, the people, and all of the outreach and advocacy. It’s a wonderful place to be. There is positive energy here.”

Since last spring, “Lifting Your Mood” has focused on depression, emotions and feelings using Cognitive-Behavioral Therapy curriculum from a trained and certified therapist, Lembke said.

Other groups this semester include “Sailing Through Storms: Enhancing Mindfulness and Distress Tolerance Skills,” “Nurturing Yourself” and “Validate and Honor Rather Than Judge and React.”

“Nurturing Yourself” is a closed group which explores boundary issues, self-care, mindfulness and supportive therapy techniques and will be open again next semester, Lembke said. “Validate and Honor” is also closed to members completing “Lifting Your Mood” training.

Group therapy may be continued as long as a student is enrolled, whereas individual therapy services are brief and time-limited, Lembke said.

Groups are not drop-in, although students may join at different times, Lembke said. Students should call in advance to ensure the group will meet their needs and there is space available.

Group members are informed about the Cognitive-Behavioral Therapy process and supported by leaders, Lembke said.

Emotions are identified and distinguished from thoughts in CBT, Lembke said, by examining how an emotion leads to thought, or cognition, and influences positive or negative behaviors.

“CBT is effective with depression and anxiety,” Lembke said. “You could make an argument that it can be used for most any situation.”

All counseling is confidential and provided at no additional cost after student health fees are paid.

Client confidentiality for groups and individual counseling is the same, Lembke said. Names and personal information are protected by a triple password-locked system, she said.

“Only the participants know each other and can share names at their own discretion,” Lembke said.

Confidentiality makes therapy powerful, Durst said, but the biggest challenge is getting students to attend their first group session. The next obstacle is the composition of a group, she said.

“Most of the time it works out and grows or develops,” Durst said. “Occasionally, it may not be the best place for the individual to develop.”

Abbott said forming a group is challenging, but creative, and its success is based on interviewing people in advance to make sure they are a fit.

“One person can make or break a group. Someone that’s severely narcissistic or has a personality disorder would be better served with individual therapy,” Abbott said. “That person would monopolize the group’s energy and others would not be motivated to come back.”

Durst said CAPS is qualified to assist clients that are more comfortable with individual therapy.

“If you have a good client-counselor relationship and trust, it doesn’t matter what theory or model is used. You just have to talk it out and use life skills,” said social worker Cecilia Ramirez.

Ramirez said she does not know in the long term how helpful CBT or any psychological method is beyond just building a consistent bond and being there for clients.

“Groups, however, really seem to benefit from peer interaction and learning from each other’s mistakes,” Ramirez said.

Ramirez was on campus Thursday night for a master’s in social work degree application workshop. She earned a bachelor’s in social work from San Jose State, she said, and conducted group counseling with inner-city youth in San Francisco while providing individual sessions for teens struggling with home life and academics.

Ramirez said she was not allowed to go to college as a young Latina from an immigrant family and she escaped by moving away to a New York school on scholarship. She was then disowned by her family.

This was followed by a deep depression she could have dealt with better if she had talked to a school psychologist, she said.

“I did the opposite. I closed off and stayed in my room. I asked for a single (dorm),” Ramirez said. “I kept looking at pictures and reminiscing and getting deeper into my depression. I couldn’t snap out of it.”

Ramirez said even if she had access to counseling services, she probably would not have used them.

“Depression does some very scary things to you. It makes you not want to search for help,” Ramirez said. “Unfortunately, I didn’t have anyone there to find me and say, ‘Come with me to group counseling’ or ‘We’ll work through this together.'”

Ramirez said a college student suffering from depression must open up slowly, starting with individual counseling and working up to a group setting.

“Even if you start off by just being quiet and observing in the back – eventually open up and talk about your feelings and some of your struggles,” Ramirez said.

Poul Larsen can be reached at [email protected]