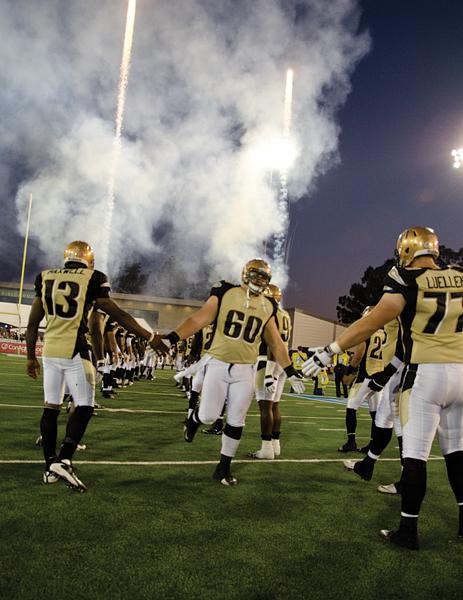 The Mountain Lions take the field Saturday night at the home opener against the Las Vegas Locomotives.

A sold-out Hornet Stadium erupted to the tune of more than 20,000 fans as pyrotechnics lit up the night sky and the Sacramento Mountain Lions came screaming onto the turf to kick off the 2011 United Football League season.

With his team down six points, four seconds remaining in the game and only three professional quarters under his belt, rookie quarterback Ryan Colburn hurled the ball 12 yards to receiver Jason Foster who pitched it to Kenny Moore in one final push for a Mountain Lion win. But the Locomotives would tackle Moore, quell the uprising and secure the win.

“I felt comfortable,” Colburn said of his first game in the UFL. “It was my first start obviously as a professional but we had guys around me making plays, I was protected really well in the second half and our guys in the perimeter were making plays and we ran the ball well, which always makes it easier for a quarterback. I thought as an offense we played really well and did a good job of not putting it all on my shoulders.”

Cory Ross, the reigning UFL offensive player of the year, rushed for 45 yards.

“(Colburn) was very confident and that’s what you need as a quarterback,” Ross said. “You don’t want to go out there looking too nervous. He did a great job. I think he even yelled at the coach one time, ‘Hey, that’s the wrong play’. You’ve got to have a quarterback like that who knows the offense, and he does.”

It was the second drive of the season that gave the Mountain Lions the lead early in the first quarter. A 55-yard, 11-play drive was ended when Mountain Lions kicker Fabrizio Scaccia put the ball through the uprights from the 43-yard-line for the first score of the game.

But that 3-0 lead was short-lived, as the Locomotives would score 1:01 later thanks to an 83-yard reception from former Oregon Duck Samie Parker, which set up a three-yard run to the right corner of the end zone by quarterback Chase Clement.

The Locomotives would strike again quickly, though, when it put up another field goal to make it 20-10. With only 14 seconds gone from the fourth quarter, the Mountain Lions were still primed to take the lead back. The MoLos had the chance to steal the lead from the Locomotives when they found themselves in the red zone for the second time. It was the fourth down with one foot to go when head coach Dennis Green sent his team out to get the first down. But there was one glaring absence – the Mountain Lions lined up without their star, Ross.

Even without the prolific running back on the line, Green decided to go for it and keep the drive alive.

“We were all pushing to go for it,” Colburn said. “His decision said everything. He was trusting us to get the first down.”

Sacramento was inches away from the first down. Colburn lined up behind the big hog mollies of the offensive line, the plan was to inch forward, but it was not meant to be – he was stopped short.

Colburn would step up late in the fourth quarter as he lead his team through a 14-play, 60-yard drive which was capped by a one-yard touchdown pass to tight end Kai Brown. But that would be the last time either team would score. Sacramento failed to capitalize, falling to the Locomotives 23-17.

“I thought the atmosphere overall was fantastic,” Colburn said. “I thought our fans were into the game. It was an exciting crowd, it really energized us as an offense and defense and I really enjoyed it – first experience with the ‘MoLo Nation.'”

The Mountain Lions take the field again on Oct. 1 at 7:30 p.m. at Hornet Stadium against the Omaha Nighthawks.

AJ Taylor can be reached at at2636@saclink.csus.edu.