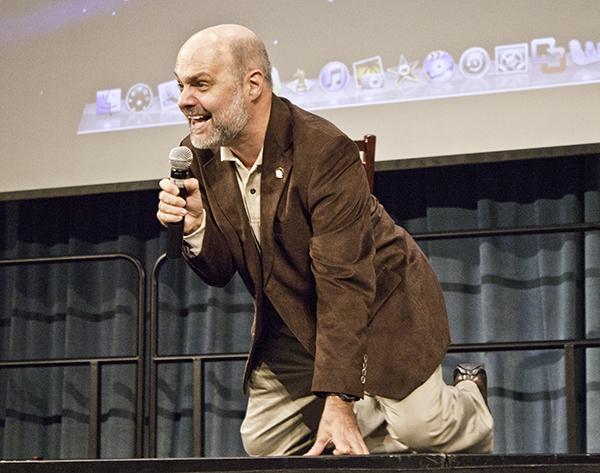 Joe Raiola expresses him true self during his speech on “The Joy of Censorship,” Thursday Sept. 15.

Joe Raiola, the senior editor of Mad Magazine, came to Sacramento State Thursday to deliver his lecture entitled “The Joy of Censorship,” where he presented his take on the restricting of first amendment rights.

Raiola has spoken in 41 states all over America about his views on the First Amendment, which he believes should be left as is.

He covered topics such as the meaning of obscenity, the Westboro Baptist Church, the Federal Communications Commission and the history of Mad Magazine as a satiric authority.

“I had my First Amendment moment in second grade,” Raiola said. He cussed out a nun after she started whipping him with a ruler. “The only thing I could think of to say was ‘f— youuuuu’!”

The first part of his lecture consisted of naming off a string of cuss words and how they should be freely used in everyday life, as long as utilized in the right setting. He also taught the audience the difference between racial slurs and degrading speech towards women in everyday life.

“Where the line? Holy s— I don’t know, the line is always moving,” he said. “Who draws the line, and do you want someone to draw it for you?”

Mad Magazine has always been controversial, from poking fun at political figures to bringing up the elephant in the room. But Raiola said there is one thing that Mad does not do – make fun of victims.

The first cover for the September 2001 issue depicted its mascot, Alfred E. Neuman, running off course of a marathon and over a dead body in New York City. It was ready and sent to print, a few days before the attack on the World Trade Center occurred. The reprint cover was a close-up portrait of Neuman with an American flag in the gap of his teeth.

“We make the call to do or not to do certain things,” Raiola said. “That’s a stylistic choice. Just to be clear, Mad Magazine’s first priority is to get the laugh.”

One thing that rubs Raiola the wrong way is social conservatives.

“It never ceases to amaze me how full of s— social conservatives are. You can’t argue that Spongebob is going to make you a homosexual,” he said.

Raiola said the fighting censorship goes all the way back to the origins of Mad Magazine. The reason why Mad transitioned from being a comic book to a magazine in the first place was because comic books begin to have stricter guidelines than magazines shortly after it began in 1952. So to counter these restrictions the editors decided to switch over to a magazine format in 1955.

“It’s all about controlling language,” Raiola said of the FCC. “Censors are all about protecting us from what frightens them. Fear is the breeding ground.”

In closing, Raiola encapsulated his message about the importance of free speech.

“Use it or lose it. Free speech is a muscle you have to exercise, or it atrophies.”