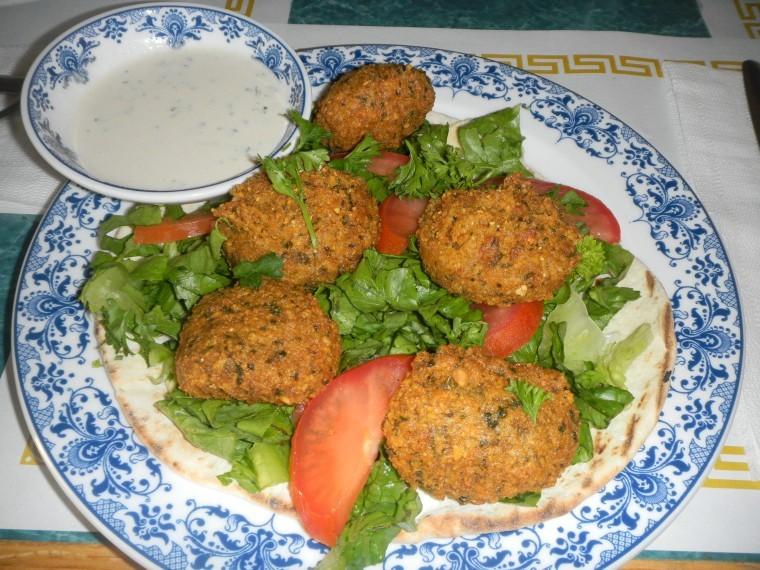 Falafel is one of Fresh Medi’s most popular dishes.

There is nothing sour about Fresh Medi.

The aroma of this new Afghan-Mediterranean-Greek restaurant on Fulton Avenue is irresistible. The smell of the spices is detectable even from outside the restaurant, making it impossible not to go in to at least glance at the menu.

Upon first glance, the restaurant is extremely inviting. Customers are drawn in with calming colors and vibes; drapes of colorful fabric hang from the ceiling, ceramic artwork upon the walls, and red roses rest in centerpiece vases.

The owners and workers are friendly beyond belief. They treated customers with great appreciation and consistently made sure that everyone was enjoying their time and their meals. This restaurant is run by one family, which brings a lot of comfort to the table.

“Being in here feels like being in a family-run barbershop,” said customer Robert Sperou. “It’s cool to see how everyone works together.”

Besides the extraordinary hospitality, the food was incredible; no one would ever expect to have their mouths filled with so much magnificence.

One of the most popular dishes on the menu are the Mediterranean nachos, which were far from the crunchy, orange-goop cheese gunk one might get at a convenience store. In fact, these nachos were probably God-sent with their crunchy pita chips smothered in minty sour cream, tomatoes, feta cheese, jalapenos, diced cucumbers, cilantro, chicken and other undefinable goodness.

It was obvious everyone was overly satisfied with their order, particularly due to the sensual sounds they projected with every bite. Along with the Mediterranean nachos, the most popular dishes are the gyros – which is meat, veggies and tzatziki sauce wrapped in a pita – and the chicken kabob.

Owner Ray Barakat and his wife, Zainab Barakat, have been in the restaurant business for more than 20 years, sharing traditional dishes from their Middle Eastern cultures. Many of the recipes are old family recipes but, as Ray Barakat explained, they are always in the process of creating new dishes to add to the menu.

Not only is the food radically good, but the prices are super affordable. All of the appetizers cost $5 or less, the average price of a meal is about $7 and the most expensive item on the menu, which is an entire trout, costs $14.99.

Along with the food itself, the dipping sauces, dressings and even the pita breads are all made in the restaurant, and that becomes clear at first bite. This stuff is the real deal – all made with a tasteful amount of love and culture. Everything has profound flavor – even the simple, buttery rice which is served as a side dish with each entree.

The Fresh Medi menu also includes falafel, which is a food widely known throughout the Middle East. Falafel is also great for vegetarians who want to have an authentic food experience. It consists of ground chickpeas rolled into a balls or patties and deep fried in oil and served over pita bread, hummus, lettuce and a side of cool tahini sauce. Fresh Medi’s falafel is crunchy, crisp and practically melts in your mouth. The texture and combination of the ingredients is to die for and most definitely worth a try.

Fresh Medi has a secret – a secret menu that is. It consists of Chinese food, Pakistani food and more. This menu is mainly due to the owners still contemplating what to put on the main menu, but it is nice to know that there are more options than what appear on the menu if someone does not like what he or she sees.

“Whatever the customer wants, we will do,” Ray Barakat said.

It is closed Mondays.

Janice Daniels can be reached at [email protected]