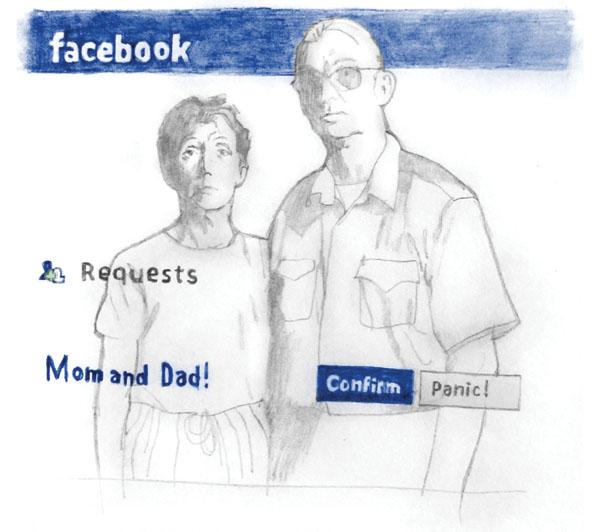 There are two schools of thought when it comes to Facebook.

Facebook is the best. We can share pictures and status updates with friends all around the world in the blink of an eye. What’s not to love?

Facebook is the worst. We have to be constantly paranoid about what is said to or about us. We have to carefully monitor everything we do because of the risk it might be seen by employers, co-workers or relatives. What’s the point?

Facebook’s many enticing features allow people to socialize in never-before-seen ways. It’s fast, convenient and easy to use, but the privacy concerns it has created make some question its worth.

Social networking’s increasing popularity among older and professional demographics has turned it into a risky business for the younger generation that initially took to it.

Many of us have heard horror stories about people getting fired over status updates they never thought their boss would see.

Or about parents seeing the embarrassing pictures of you passed out in a hot tub.

Or a girlfriend constantly asking why you’re always commenting on another girl’s pictures even though you’ve already explained to her a million times that she’s your entire world and the other girl is just a good friend who happens to be really hot but has low self-esteem so you’re just being a good friend by complimenting her ability to pull off a wet, white halter-top!

A lot of drama can fall upon anyone who doesn’t tread carefully along the walls of Facebook.

It’s easy to ensure that a social event, like a night out on the town, is experienced firsthand only by the friends who are invited. But it’s becoming nearly impossible to guarantee that those friends will be the only ones able to relive the memories, whether or not you prefer it that way.

That’s how Facebook has become a blessing and a burden.

Getting a friend request should be a mildly exciting event. Not a stress-laden moment that leaves you frozen in indecisiveness.

Do you accept your aunt’s friend request in order to placate her but then live the rest of your Facebook life in fear?

Or do you deny the request, because you know she is no longer your mom’s fun-loving older sister, but a secret agent with sinister motives, just waiting to humiliate you at the next family reunion?

If you attempt to keep good vibes in the family, you risk exposing some secrets you might not have even known you had. But by playing it safe you are all but ensuring a lifetime ban on handmade Christmas gifts.

Sac State alumnus Matt Jones said one way to avoid trouble is to have nothing to hide.

“I am the same person all of the time,” he said. “I don’t change the way I am when I am at work or with family and friends.”

But for those of us with more skeletons than closets, life isn’t so simple.

Maybe your family knows you like to party and isn’t bothered by your Exhibitionists Retreat 2008 album, but your new boss might be.

“I have family and co-workers (as Facebook friends) so I don’t post anything too racy,” said senior environmental studies major Darsi Goto.

Employers are becoming increasingly savvy when it comes to social networking. In order to find any dirt you may have floating around online, companies will search your name on sites like Twitter, Facebook and MySpace.

Now, I know what you’re thinking.

“Who in the hell still has a MySpace?”

And you’re right, most people our age have outgrown the need for MySpace.

And if you’re over 25 and thinking, “Hey! I still have a MySpace!” then you might want to call a lawyer because you’re probably an Internet predator.

But that begs the question, when do you outgrow the need for Facebook?

It would seem that social networking is no longer an age-specific service. With multiple generations registering with Facebook, more and more relatives and co-workers are going to be lurking around every cyber-corner.

But, the value of being able to secretly and comfortably stalk people online is too great to give up because you fear your mom might be trying to utilize Facebook as a parenting tool.

So here’s the plan.

After I’m done furiously fortifying my privacy settings, I’ll forge a letter from the AARP accusing Facebook of stealing Social Security numbers and life insurance policies. That should buy me at least three more years before my grandparents find their way to my profile.

Dante Frattini can be reached at [email protected]