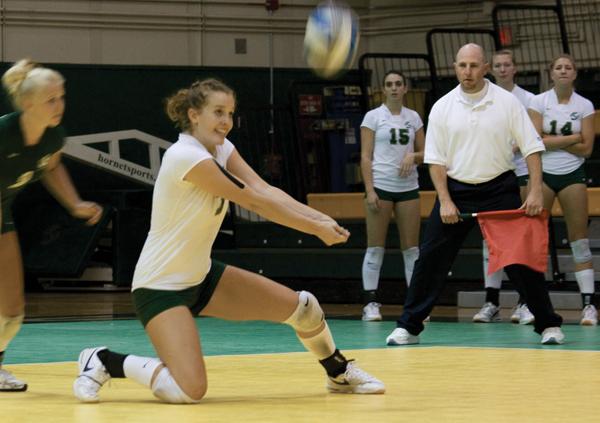 Title IX volleyball:The Obama administration is attempting to close a loophole in Title IX, which is designed to provide equal funding for NCAA men?s and women?s sports.:File Photo

Vice President Joe Biden announced April 20 the Obama administration would overturn the 2005 revised interpretation to Title IX federal law, which was said to provide a loophole in the law.

Title IX reads that no one shall be discriminated against due to gender and requires colleges and universities to meet gender equity by enforcing a three-pronged test.

The test requires schools to meet one of the following three standards.

The 2000 Government Accountability Report showed that 53 of 74 schools used the first part of the three-part test.

“You’re required to make changes with the same funding you have to make the numbers work based on a new set of criteria potentially if you haven’t already dealt with it,” Macriss said.

Macriss said colleges and universities often try to meet their school’s ratio by eliminating sports. They have to make adjustments to the number of sports they retained, number of participants, funding to those programs and scholarships to those programs, he said.

A majority of schools avoid the second prong because of financial costs and they avoid the third because if its vagueness. This is where the 2005 interpretation of Title IX comes in.

The 2005 interpretation of Title IX attempted to lessen the ambiguity of the third prong of the test by requiring schools to take surveys to measure their students’ interests in athletic programs. Then, based on the results of the survey rather than enrollment, they decide to create or take away sports.

Schools were using the new interpretation as a scapegoat to avoid following Title IX rules and regulations.

While the 2005 interpretation failed to accurately define the third prong, organizations like the College Sports Council are still pushing for Title IX to be revisited.

He said the law, in its current form, guarantees discrimination.

“It basically all comes down to proportionality,” he said. “When Title IX came into effect we saw schools in late “70s early “80s getting rid of male programs to make things appear equitable under the intent of adding women’s programs. That’s not providing opportunities for women, that’s taking away opportunities for men.”

The United States Department of Education conducted a commission report for opportunities in athletics titled, “Open to All: Title IX at Thirty.” In the report, Corey Bray, NCAA’s assistant director of research for educational services, said her research found that on a per school basis, the number of male athletes has decreased by 7.7 percent between 1981 and 2000. The number of female athletes has increased over that time frame by 52.6 percent.

Knepper said he supports Title IX in the respect that it provides opportunities for women’s sports, yet he feels it has not worked and is inherently sexist. The law should be altered so that providing women’s sports doesn’t mean taking away men’s sports, he said.

“Numerous cases have been brought to the regional circuit courts and to courts of appeal to revamp Title IX,” he said. “But each ruling came down in favor of the law, saying that it’s OK that it’s made it legal to discriminate.”

Knepper said if courts were to stop focusing on being politically correct and rather on the actual issue at hand, a solution could be reached.

“Whenever people hear anything against Title IX, they think its obstructing women’s sports,” he said. “That’s not the case here. If sports helped get more women in college, it was a positive thing. Why take it away from men?”

Knepper said Title IX is also beginning to have a negative impact on women’s sports.

The commission also reported that Carol Zaleski, former president and executive director of USA Swimming, said Title IX has evolved into something that was never intended.

“The act was intended to expand opportunity,” Zaleski said in the report. “The interpretation by the Office for Civil Rights and the evolved enforcement has turned into a quota program. Title IX is a good law with bad interpretation.”

In the same report, Marty Mankamyer, president of the United States Olympics Committee, warned that if the elimination of programs continues, the consequences will be evident by the absence of American athletes on the medals podium at future Olympic games.

Nevertheless, the courts have stood a strong ground when it comes to maintaining Title IX in its current form.

Sac State softball head coach Kathy Strahan said enabling schools to balance Title IX without cutting programs at the present time was unrealistic due to the economic climate in the country.

Strahan said the law has worked well to bring quality to school athletics for both men and women.

Macriss said for Sac State, it is not a question of advantage or disadvantages, but that Title IX is a law the athletics department works hard to follow.

“We work very hard to raise money through fundraising ticket sales, through any avenue that we can so we can provide as good as an opportunity as we can for both the man and women on this campus,” Macriss said. “It is and has always been vision and mission of this campus to have a broad base of athletics for all its contestants.”

Miriam Arghandiwal can be reached at [email protected]