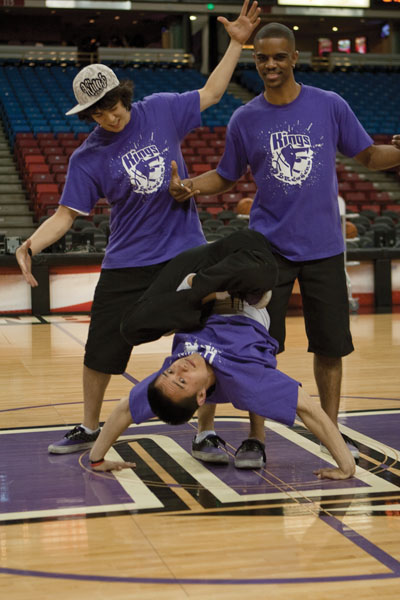 “Break dancing is like a rollercoaster ride; we get that adrenaline rush when we’re performing in front of thousands of people,” Horiuchi said.

Shaw and Horiuchi, Sacramento State students and friends, are two of seven members of the King Breakers, the official break dancing team for the Sacramento Kings.

The Breakers are one of the first official NBA break dancing teams in the nation.

Horiuchi said the team came about in 2007, when the Kings organization was looking for new talent to entertain the crowds.

“Break dancing is a very energetic dance and gets crowds pumped up,” Horiuchi said.

He said the schedule for the Breakers’ performances depends on the progress the King’s basketball team.

“If the Kings are leading the game we go out there, if the Kings are down then we don’t. You can’t dance for a crowd that’s not being entertained by the game,” Shaw said. “Our job is to help with creating an atmosphere where the fans can appreciate entertainment along with the game itself.”

Keeping up with the hectic and fast-paced environment is a part of the team’s job, he said.

Along with performing at games, the Breakers also perform for the Kings when the team goes out into out the community for events.

“We’ll go with them to perform at places like high school rallies or a season ticket holder party and we even performed at an all-star game,” Horiuchi said.

Before dancing for the Kings, Horiuchi and Shaw met each other while dancing in a series of different dance competitions.

“Jayson used to live in Los Angeles and he’d come up here for competitions. We met each other on a number of occasions,” Horiuchi said.

Horiuchi, a Sacramento native, began break dancing in high school after his twin brother, Kurt Horiuchi, and a few friends took interest in it.

Vince Horiuchi’s father, Bobby Horiuchi, said both his sons were into martial arts before they began break dancing.

“They used to practice hand-stands while waiting for their marital art classes to start,” Bobby Horiuchi said. “Soon, Vince came up to me and said, “We like dancing better because in martial arts you get beat up when dancing.'”

Shaw also had his hopes set on other passions before he began break dancing.

“It was a big decision for him to leave soccer. He had traveled around the world because of it and had built so many friendships with it, but he loved dancing so he had to make a choice,” Anita Shaw said.

“We grew up in a family that loved music and dancing. So when I picked up break dancing, I wanted to show Jayson because, being the athletic person that he was, I knew he’d love it,” Devin Shaw said.

With supportive families behind them, Shaw and Horiuchi have been able to explore a wide variety of opportunities, Shaw said. Anita Shaw, who lives in Los Angeles, said although she is far from Jayson, she is happy he is following his dreams.

“Jayson lights up a room when he’s in it; everyone loves him,” Anita Shaw said. “It’s difficult not having him around, but we understand and we try to get together as often as possible.”

Shaw said that time away from his family is a sacrifice but also that it was part of growing up.

“During Christmas, the Kings play the Lakers and so the Breakers can’t miss that. My mom understands, though,” he said.

Anita Shaw said her son does a good job at sustaining a long distance relationship with his family.

“He looks every obstacle as a challenge. Whatever it is he tries to figure out a way to break through it,” she said.

Helen Plenert, Horiuchi’s mother, said she has no worries for her son.”He’s getting an education so he has something to fall back on.

I told him, “Hey you can’t do this forever, so pursue it right now,'” Plenert said.

Horiuchi and Shaw said maintaining all aspects of their lives is difficult but not impossible. They said they practice together with the Breakers once a week, but do dance outside of the team as well.

“We’re part of other dance teams, so we’re really practicing anywhere from five times a week to everyday,” Horiuchi said.

“It’s a non profit program that brings art into the community. I teach at low-income, impoverished schools, where kids don’t have much and so break dancing gives them something to look forward to,” Horiuchi said.

Shaw said given responsibility on the Breakers, other dance teams, school and his part-time job at Ikea, his biggest challenge is time management.

“I have the craziest schedule, sometimes I even forget to eat. My passion is within dance and school so I find time to get my work done.

If I’ve stayed up studying and have practice the next day, I’ll still be at practice and be ready to help my team,” Shaw said.

Horiuchi said although their busy schedules are demanding, they would prefer to be busy and productive than not at all.

“You have to put hundreds of thousands of hours of work into anything you do to be great at it. It doesn’t matter if it’s math or dancing, you need dedication,” Horiuchi said.

For Horiuchi and Shaw those hours of work also consist of choreographing dance moves.

“There’s a certain freedom to break dancing. It’s a street dance so there’s no limitation on it,” Horiuchi said.

Break dancing is derived from hip-hop. Unfortunately hip-hop has a dark reputation and therefore break dancing has gained one as well, he said.

“People think hip-hop and they think of violence and profanity. That’s not what we are. We’re college students that are trying to push a positive message,” Horiuchi said.

Shaw said the King’s have helped the Breakers in delivering their positive message by giving them a warm welcome.

“Our management really supports us. With us being a new group, they want us to be on the same level as the Sacramento King Dancers. The girls have been with the Kings for a long period of time and are highly recognized for their success,” Shaw said. “They (the management) push us, encouraging and funding us to go on competitions such as Americas Best Dance Crew and America’s Got Talent so we can get our name out there.”

Looking forward, Shaw said that after he graduates he plans to continue dancing and hopes to move up in the Kings organization as a stage director or entertainment director. To be part of a dance major dance company would be a big achievement, he said.

“Even before the Kings, I was an intern at Radio Disney, so I’ve always been interested in the entertainment industry. I want to stay in that field and hopefully build my way up with my resume,” Shaw said.

Horiuchi also looks forward to furthering his career in dancing and teaching.

“I had a 5-year-old that I teach win a break dancing competition while competing against 18-year-olds. That was an amazing feeling. People think what we do is impossible, and I want to show that anything is possible if you try. I want to do the impossible,” Horiuchi said.

Miriam Arghanidwal can be reached at [email protected]